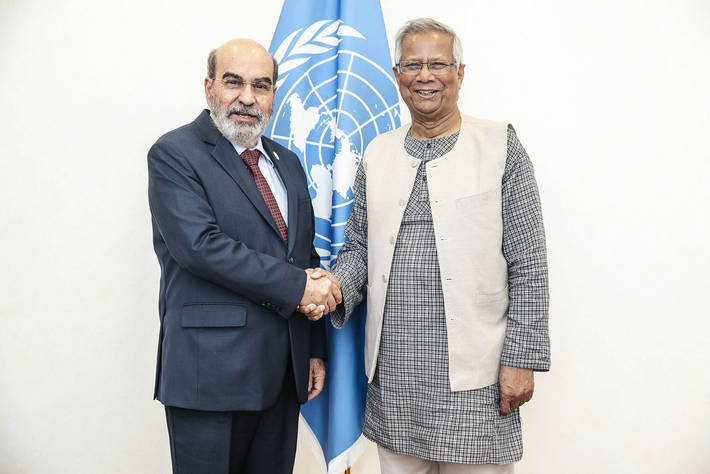 “Violence and conflict are the main cause of hunger nowadays in the world,” said Graziano da Silva. “We need peace to have food security,” he added, underscoring the fact that the number chronically undernourished people has been increasing over the past three years.

For his part, Yunus said: “Violence is creating a problem of poverty, a problem of hunger, migration and famine. Our way of looking at it is to bring opportunities for people to help them stand on their own feet.” He noted that “microcredit helps people particularly women generate their own income by getting involved in businesses and enterprises,” and that “it is sustainable and not charity-dependent…. It encourages energy and the creativity of young people particularly”.

The remarks came during their meeting on the sidelines of the FAO’s Committee on Agriculture (COAG) meeting in Rome.

Graziano da Silva also expressed concern about how the impacts of conflicts and climate change, such as extreme droughts take their toll on rural entrepreneurs, particularly on women and young people in Africa. FAO in collaboration with the Yunus Social Business Centre is trying to provide opportunities for people to generate their own income via capacity building, training and microcredit in countries like the Central African Republic that have been devastated by civil war and are trying now to rebuild their economies, he said.

During their meeting the Graziano da Silva and Yunus also highlighted the importance of stepping up collaboration between the UN agency and the FAO-Nobel Peace Laureates Alliance for Food Security and Peace to redouble efforts to better promote awareness on the growing link between conflict and hunger.

Yunus, who is the renowned founder of the Grameen Bank, the so-called “Bank for the Poor”, said that support for rural entrepreneurship should lie at the heart of solutions to hunger and instability.

The FAO Nobel Peace Laureates Alliance’s launched of its first project in the Central African Republic which is aimed at enhancing capacities of internally displace people, ex-combatants, women and youth to jumpstart their livelihoods and return to a peaceful life. This is being achieved by providing the beneficiaries with a better understanding of how markets work, facilitating their access to improved production systems and making their farms more climate-resilient.

The Nobel Peace Laureates Alliance was established by FAO in 2016 with the mandate to amplify the discussions on how peace is a pre-condition to achieving food security for all, and how improving food security can contribute to peace.

India Film Project – Asia’s Largest Content Creation Festival, Welcomes some of the Biggest Names in the Industry for Season 8