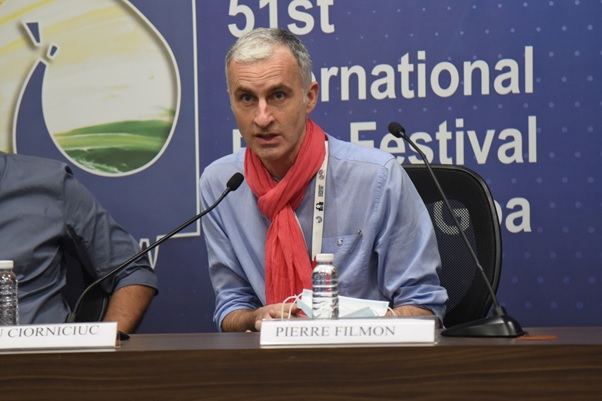 Panaji: They were meeting after nine long years of separation. They had eighty minutes to rewind their journey, re-evaluate their lives, to face their truth, regrets and memories. And, this is their last chance. In a nut shell, the story of the French movie `Long Time No see’ can be described like this.

Directed and scripted by Pierre Filmon, ‘Long Time No See’ tells the turn of events in the life of two people who, though for a brief time, were intensely in love in the past and quite unexpectedly, meet at a railway station after nine years and had only 80 minutes to spare.

The director while addressing a press conference today, January 21, 2021 at the 51st International Film Festival of India, in Panaji, Goa said, “It took me many years to write this project, even though the shooting just needed five days, because, from action to cut, it was shot in long shots.”

Filmon said he began writing the script for the film when he was quite young. “I wrote a script about two people meeting in a hospital. They met, fell in love and had intense moments, but they got separated.”

The movie was screened under the World Panorama section of the festival. Filmon had quite an emotional journey before having been able to transform it into a film. “My script was ready but when it was time to produce it, another French film came out with the same synopsis; and it killed my film. It was not like stealing any idea, because sometimes, we film makers have more or less the same idea. Yet, it took me years to recover from this. After that, one fine day, I took the old script and thought it cannot just die as it meant so much to me. I was ten years older by then, but that never mattered. After many rewrites, we finally arrived at where we are today.”

Filmon was asked how he finalised shooting locations since the characters of the film are complex and had to be shown within a short time span of 80 minutes. “Landscapes inspire me. The places where I have shot the film – be it the railway station, the botanical garden – I knew every inch of their situational details, as for a year I walked past them every week. I knew those places would add something to the story.”

When asked about why railway station was chosen as the main location, Filmon quoted one of the first movies in history, by Lumiere Brothers, in which the initial shot is of a train coming towards the camera. “Railway stations still open the minds of every viewer to various emotions. Life comes to a full circle there.”

While thanking IFFI for inviting the film here, Filmon said, “It’s an international pride to be here in Goa to present our film. I was here four years back and it feels like home-coming.”

The movie in which Laëtitia Eïdo, Pierre Rochefort have acted as main protagonists, has won some awards including the Nominee Audience Choice Award for Best Feature at the Stony Brook Film Festival 2020 and the lead actor won the best actor festival prize at the Girona Film Festival 2020.

Director Pierre Filmon is short film and documentary director. His documentary was chosen in 2016 for the official selection at Cannes. A member of the Cinémathèque Française and the ARP, Pierre now produces his own projects through his company Almano Films. He is currently finishing his fifth short film.

University of York: York researchers collaborate in the ‘most important health…

iednewsdesk Jan 21, 2022
Researchers from the University of York and Hull York Medical School will work in partnership with the Bradford…