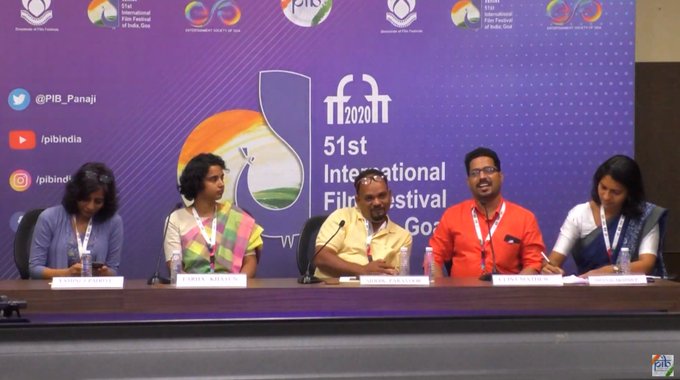 Panaji: “Thahira’s never-give-up attitude towards life helped in taking care of her sisters’ education and marriages. She also constructed a house with her hard-earned money, after her family lost everything due to her father’s debts”.

The Malayalam feature film ‘Thahira’ under IFFI 51 Indian Panorama Feature Film section tells the story of a real-life character – a hard-working and partially deaf lady, Thahira and her journey through life, shouldering responsibilities.

Siddik Paravoor, director of the film, was addressing a press conference today, on Day-6 (January 21, 2021) of the 51st International Film Festival of India, currently underway in Goa. Thahira and Clint Mathew, the visually impaired actor who plays the role of her husband Bichapu, were also present at the press conference.

Workshop on ‘Application of ANSYS to Engineering Problems’

Thahira’s life is much like a film with unexpected twists and turns. Despite being hearing impaired, she survived all odds and never gave up on life. The sight of Thahira riding her scooter loaded with 50 kg sacks of cattle feed has been a common sight in her village. Apart from this, she also teaches driving to women in the locality.

It was this inspiring tale of Thahira that attracted Siddik to come up with a movie based on her life. However, he was not able to find an actress who can effortlessly pull of the heavy works done by Thahira. That is when he came up to the conclusion that he will cast none other than Thahira to portray herself on screen. Though she was apprehensive initially, Siddik managed to convince her and thus Thahira became a movie star.

Paravoor tells how the lead actors were identified. “Though I initially tried to get a heroine for the film, I could not find a woman who could do all the manual work being done by Thahira. Finally, I asked she herself to act in the film, which she accepted after some hesitation.” “Since we were on the lookout for a hero who had to be visually challenged and handsome, we came across Clint Mathew. Initially, he was reluctant but finally agreed to play the role of Bichapu, Thahira’s husband.”

Speaking to PIB on the side-lines of the press conference, the debut actor Thahira said: “Thahira is my real life story; Director Siddik Paravoor asked me if I can act in the film. I told, I don’t know how to act, but only to live”.

Ahimsa – Gandhi: The Power of the Powerless shows the global impact of Gandhian message of non-violence: Director Ramesh Sharma

Workshop on ‘Application of ANSYS to Engineering Problems’

Yonsei University: Simple Blood Test for Early Cancer Detection Could Soon Be a…

iednewsdesk Jan 21, 2022
Cancer research has come a long way in the past few decades; however, many patients are diagnosed too late, which…