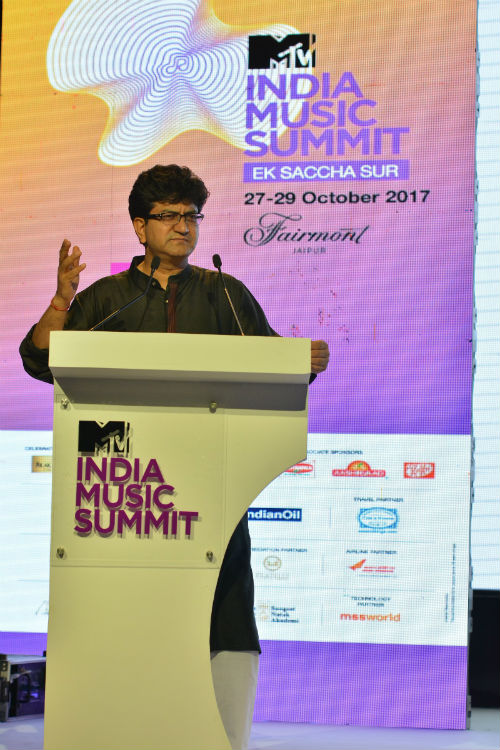 Jaipur: The Pink City saw the largest gathering of musicians in India, with over 100 well known artistes coming together to launch the first ever MTV India Music Summit. Day One of the Summit witnessed a grand inauguration with the legendary Pandit Jasraj who was in Concert & Conversation with celebrated lyricist Prasoon Joshi. Pandit Jasraj offered a soulful tribute to the eminent classical vocalist, Girija Devi, who was to open the Summit and share the stage with him for the very first time. Panditji’s beautiful ode to the Queen of Thumri was a truly poignant moment and an unforgettable first session for the Summit.

The Summit’s first concert was a large format open air extravaganza produced by Leslie Lewis, featuring greats like Hariharan and Kaushiki Chakraborty (vocalists), Ustad Shujaat Khan (sitar), George Brooks (saxophone), Amit Chaubey (tabla), and Ajay Prassanna (flute). The grand inaugural day got even grander with Papon adding his quirky style to the evening, followed by jazz on the poolside lawns with silken-voiced Vasundhara Vee & her quartet and a night of mesmerizing thumris by the incomparable Kaushiki Chakraborty.

Speaking about the inauguration of MTV India Music Summit, Mala Sekhri, Founding Partner, MusiConcepts, said, “It feels so good that finally, after months of hard work, we are here in Jaipur post an immensely successful inauguration of the Summit. The love and support we are receiving from the music fraternity is very encouraging and the sheer number of accomplished artistes that were present today speaks volumes of the quality MusiConcepts have been successful in bringing together for the Summit. The kind of response Day 1 received fills us with excitement for the coming days.”

Excited about a positive response to the first ever Summit Mr. Ferzad Palia, Head, Youth, Music and English Entertainment, Viacom18, said, “We are ecstatic to have received a phenomenal response from the audience on the very first day of the MTV India Music Summit. MTV has always been the brand defining India’s taste in music and we are proud to be associated with a summit that is all about celebrating music in all its forms. The Summit is designed to dissolve the distance between the stage and the audience, where the energy of the music, musicians and music lovers becomes one. We’d love for the audience to come and be a part of the magic.”

The Summit is a congregation of music lovers and musicians under one marquee and brings together a rare variety of genres – from Hindustani and Carnatic classical to jazz, folk, devotional, electronica and more. Immerse yourself in three days of soul-stirring performances, conversations and panel discussions around music and musicality, enlightening workshops, defining documentaries and a slew of voices and sounds that will take your breath away.

MTV India Music Summit aims to create new sound and content, get artistes out of their comfortable templates, disrupt the existing myths surrounding genres and create platforms to showcase themselves the way the world hasn’t seen or heard before. Taking to the stage tomorrow are the stalwarts from the world of music such as TM Krishna, Ustad Rashid Khan, Clinton Cerejo, Sona Mohapatra amongst many other great names. It is going to be a treat for all music lovers so you better not miss what’s in store for you tomorrow!