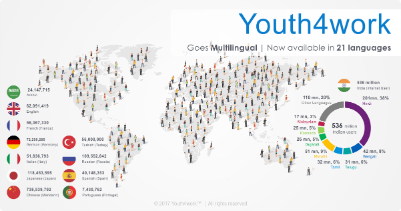 According to government data, India has 536 million internet users out of which 46% are English users and 54% are regional users as they find content in regional languages more reliable than the content in English. However, the growth of the Internet users in India will bloom if the internet has more content in the local language.

Rachit Jain, CEO of Youth4work.com says, “The problem of the youth in one country is same as in another, and our firm has always focused on how to solve them by assessing and evaluatingthe youth through our platform which acts like an exposed labour market as well as the job market which connects the two with each other. The platform uses its advanced technology for showcasing the young minds, digitally.”

The purpose of launching the website in 21 different languages is to help the Youth in the need of the hour.