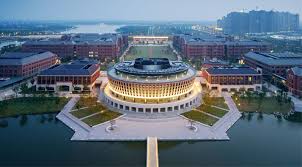 On December 8, WU Zhaohui, President of Zhejiang University, met with a delegation led by His Excellency Mr. Laurent BILI, French Ambassador to China. The ambassador was accompanied by Mr. Benoît GUIDEE, French Consul General in Shanghai as well as the attachés for politics, education and economy.

Also present at the meeting were HE Lianzhen, Vice President of Zhejiang University, LI Min, Director of the Office of Global Engagement, and SHENG Weimin, Vice Dean of the School of Mathematical Sciences.

President WU extended his cordial welcome to the delegation and gave an overview of the development and strengths of the University. “The COVID-19 pandemic has thrust us into unprecedented times when global collaboration has never been more important,” said WU.

He added that ZJU places considerable stress on its partnerships in France and is looking forward to expanding and deepening cooperation with French institutions, for instance, by harnessing new opportunties the Fourth Industrial Revolution has brought in its wake.

Mr. BILI commended the fruitful cooperation between ZJU and French universities. He introduced the development of tertiary education in France and recent achievements made in the national reform to overhaul its higher education system.

“I am hoping to cement ties between French universities and ZJU.” Mr. BILI said, “We should also adopt new approaches to collaborative education and university-enterprise cooperation, so as to promote the sustainable development of France-China higher education cooperation.”