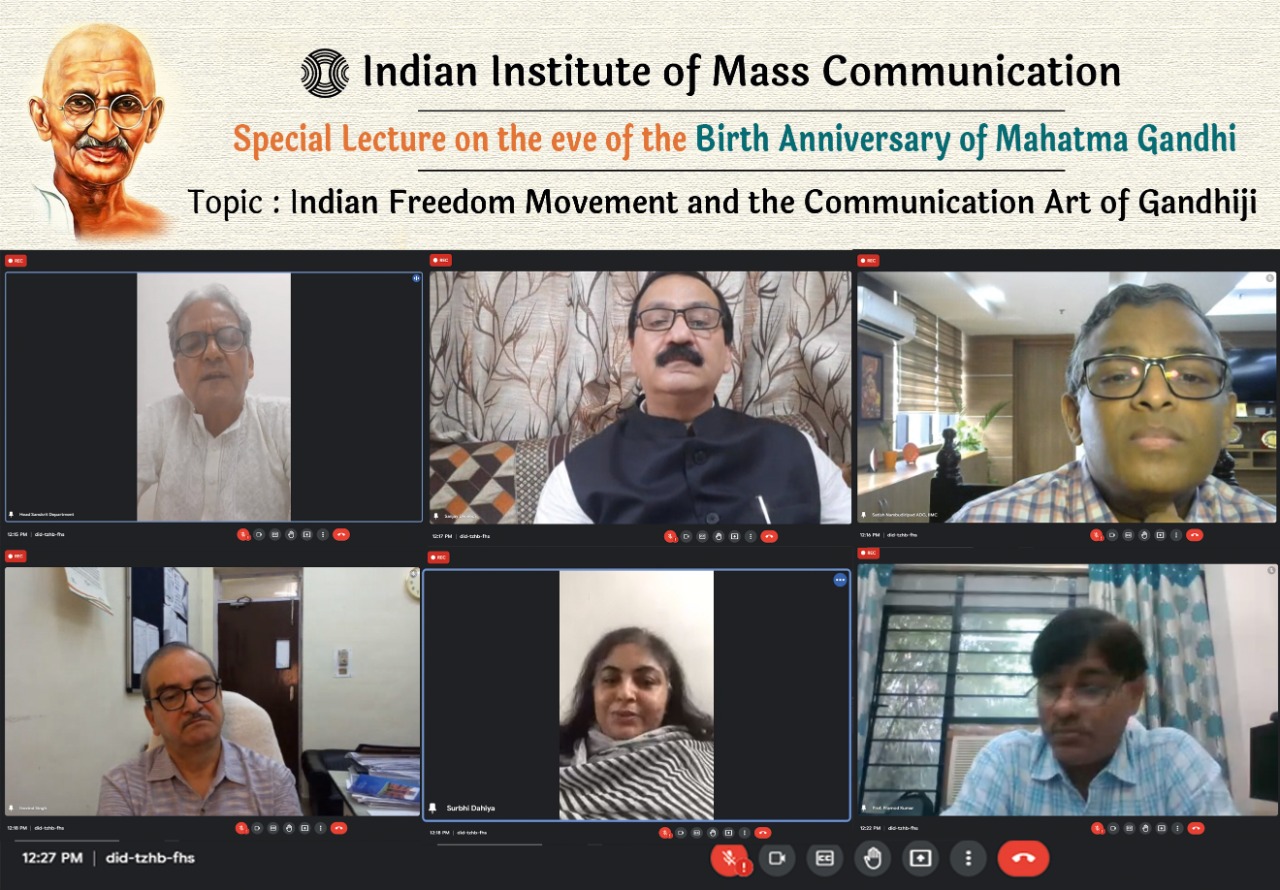 New Delhi: “Mahatma Gandhi was the greatest master of the art of public communication. His capability to explain his point of view and deliver it effectively to the appropriate person was the most important aspect of each of his movements. To bridge the communication divide, we should all draw inspiration from Gandhi’s life.” This view was shared by the Director of Gandhi Bhawan, University of Delhi, Prof. Ramesh Chand Bhardwaj in a special lecture organized on the subject ‘Indian Freedom Struggle and Gandhiji’s Art of Communication’; organized by the Indian Institute of Mass Communication (IIMC) on the eve of Gandhi Jayanti. The Director General of IIMC, Prof. Sanjay Dwivedi and Additional Director General Shri K. Satish Nambudiripad were also present. The event was presided over by the Dean (Academics) of the institute, Prof. Govind Singh.

Prof. Bhardwaj said that Mahatma Gandhi developed the techniques of communicationinto a fine art.This aspect of his personality was on display as soon as he returned to India. His Bharat Darshan visits should be seen in the context of a means for establishing communication with the people of the country.

According to Prof. Bharadwaj, Mahatma Gandhi was the first individual in the freedom movement whose authenticity could not be questioned. There has never been a difference between Gandhi’s words and deeds. That is why he said that ‘my life is my message’.Gandhi spoke the countrymen in their own language and made serious efforts to tackle the problems that affected 80 percent of India’s population. As a result, he was able to touch the hearts of every citizen of the country.The communication he established through integrating with the people of India is a one-of-a-kind example of Communication art.

Prof. Bhardwaj said that Mahatma Gandhi’s experiments towards establishing Communication are a part of his legacy. He believed that Communicationcould be better if it worked towards uplifting the moral force of the reader or viewer. Mahatma Gandhi always kept his words in simple language. What they said had the effect that they wanted.

Presiding over the program, Prof. Govind Singh said that during the time of his studies, Gandhiji was inclined towards journalism. During this time, he wrote a series of twelve articles in ‘The Vegetarian’ newspaper. He raised the problems of people of Indian origin living in Africa through ‘Indian Opinion’. Prof. Singh said that with his art of communication, Gandhi created his clones all over the country, which were successful in taking his ideas to the last person.

The welcome address in the program was delivered by the Course Director of the Department of English Journalism, Prof. Surbhi Dahiya and the programme was moderated by the Dean (Student Welfare) Prof. Pramod Kumar. Professors, officers and employees of Indian Institute of Mass Communication participated in the event.