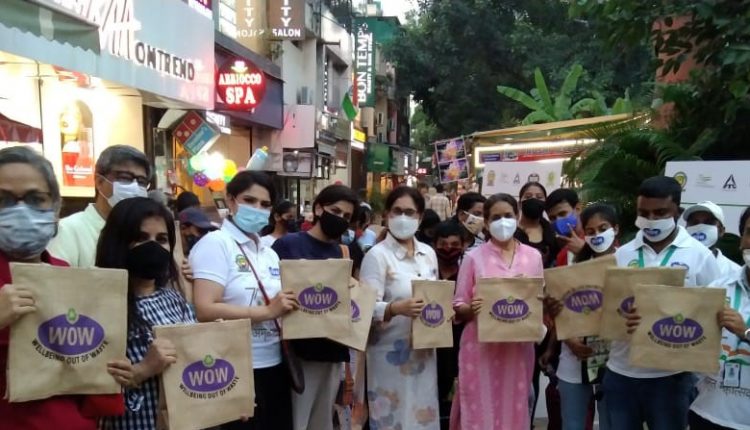 ITC Strengthens its Wellbeing out of Waste Program in National Capital

As a part of its larger initiative, ITC is working with local bodies like SDMC (South Delhi Municipal Corporation) and MoHUA (Ministry of Housing and Urban Affairs) to undertake door-to-door campaigns to promote source segregation of waste, and sensitize citizens on the importance of fostering a ‘zero-waste’ ecosystem. These initiatives formed part of the larger ‘Azadi Ka Amrit Mahotsav’ campaign to mark 75 years of independence.

To garner larger citizen participation in waste management, ITC WOW has designated special coordinators for the South Delhi wards identified by SDMC for a range of initiatives under the ‘Azadi Ka Amrit Mahotsav’ campaign. Each participating ward has a team of 30 members with representatives from ITC WOW, SDMC field staff, ragpickers, volunteers, and are being led by ‘Swachhta Ambassadors’.

As a part of the special initiative, demonstrations were made to residents on source segregation and home composting techniques with an aim to reducing waste going to landfills. Awareness was created through puppet shows, rallies, kiosks and selfie zones in key locations. School children also participated actively in the awareness campaign.

The campaign saw waste management best practices and innovations being exhibited by different stakeholders from each ward including waste entrepreneurs, volunteers and the ‘safaimitra’, households, small-scale vendors, citizen groups, Self Help Groups, Urban Local Bodies and Resident Welfare Associations and so on. The most innovative and impactful initiatives by different stakeholder groups were acknowledged through a public felicitation programme, on Friday, October 1.

Mr. Vadiraj Kulkarni , Divisional Chief Executive , Paperboards and Specialty Papers Division, ITC Limited, said, “We at ITC are proud to be partnering the State Governments and the Municipal Corporations to create an enabling ecosystem to foster best practices in waste management, towards a shared goal of nurturing a circular economy. ITC has been spearheading a large-scale solid waste management initiative through its flagship Wellbeing out of waste ‘WOW’ program, which reaches out to over 1.5 crore citizens across the country. We stand committed to significantly strengthening our waste management initiatives, including in the national capital, in days to come.”

Commenting on this initiative, the South Delhi Municipal Commissioner, Mr Gyanesh Bharti said “ITC has been our active partner in promoting the cause of source segregation amongst citizens in Delhi. We are happy to be associated with the Company’s flagship waste management programme ITC WoW, which is an effective 360-degree model, aimed at reducing waste at the landfills. I congratulate all the citizen groups for coming up with innovative solutions to combat the menace of solid waste. Our joined efforts will go a long way in making our National Capital a role model for waste management in the country.”

ITC’s waste management programme aims to ensure that 100% of packaging introduced by the company is reusable, recyclable, or compostable in the next decade.

ITC’s WOW initiative is aligned with the Government of India’s ‘Swachh Bharat’ mission where the objective is to create public education and awareness on the importance of source segregation, in order to reduce, reuse, and recycle waste to optimize resource use and lessen the burden on the planet. It also promotes sustainable livelihoods for rag-pickers and waste collectors. The programme has been carried out extensively over the last decade across various parts of India

During the year (2020-21), the ITC WOW programme continued to be executed in Bengaluru, Mysuru, Hyderabad, major towns of Telangana, Coimbatore, Chennai, Tirupur, Cochin, Muzaffarpur, Delhi and major districts of Andhra Pradesh. The quantum of dry waste collected during the year was about 70,900 MT from 1,067 wards. The programme has covered over 1.5 crore citizens, 38.26 lakh households, 52 lakh school children and around 2,040 corporates across the country. It creates sustainable livelihood for over 16,900 waste collectors by facilitating an effective collection system in collaboration with municipal corporations. The intervention has also created over 140 social entrepreneurs who are involved in maximising value capture from dry waste collected.

Majority of Children Show Keenness to Go Back to School, Finds Countingwell’s Survey