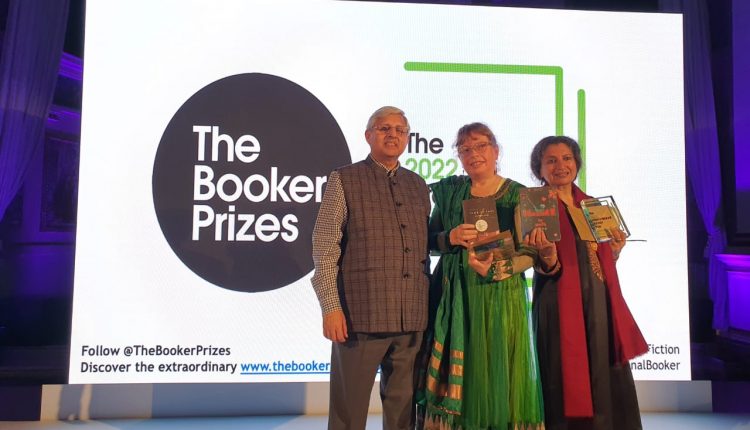 New Delhi – Renowned Novelist Geetanjali Shree’s novel ‘Ret-Samadhi’ published by Rajkamal Prakashan has been selected for the International Booker Prize 2022. This is the first Booker Prize for a Hindi Novel. The translation of ‘Ret-Samadhi’ in English ‘Tomb of Sand’ by Daisy Rockwell has been selected for this award. On the announcement of the award, author Geetanjali Shree, translator Daisy Rockwell and publisher Ashok Maheshwari, Managing Director, Rajkamal Prakashan have expressed happiness and gratitude from London.

Geetanjali Shree in her award acceptance speech said, “This is a bolt from the blue, but what a nice one and I am still reeling. I never dreamt of the Booker and I never thought I could. What a huge recognition. I am amazed, delighted, honoured, and humbled. I want to start by thanking the Booker foundation and Booker jury for choosing this book. There is a melancholy satisfaction in the award going to it. Ret-Samadhi Tomb of Sand is the eulogy for the world we inhabit, a laughing eulogy that retains hope in the face of impending doom. The Booker will surely take it to many more people than it would have done otherwise”.

She further said, Ever since the book got longlisted much has been written about Hindi making it for the first time. It feels good to be the means of that happening but it also obliges me to emphasize that behind me and this book lies a rich and flourishing literary tradition in Hindi and in other South Asian languages. World literature will be richer for knowing some of the finest writers in these languages. The vocabulary of life will increase from such an interaction. I thank my Hindi publisher Mr Ashok Maheshwari for bringing this book out and equally my English publisher.She thanked Daisy Rockwell for the English incarnation for making it accessible for everyone

Ashok Maheshwari said that being selected for the International Booker Prize for ‘Ret-Samadhi’ is a special achievement for literature being written in all Indian languages including Hindi. This further establishes that the excellent writing in Hindi and other Indian languages is rapidly attracting the attention of a global audience.

Ashok Maheshwari, Managing Director, Rajkamal Publications, on being given the prestigious award at the global level for ‘Ret-Samadhi’, said, “It is a matter of great pleasure for us and for the entire Indian literary community that a Hindi novel has been awarded the International Booker Prize. This award has reached Hindi through English translation done by Daisy Rockwell though it is clear from this that ‘Ret-Samadhi’ has attracted the attention of readers, writers and publishers globally outside Hindi.

He further said, ‘Ret-Samadhi’ had already proved its mettle by being included in the long list of International Booker Prize. Then it reached the shortlist, which further strengthened its potential. Now that it has won that award, I see this decision in the form that the attention of the world is rapidly going towards the excellent writing of Indian languages including Hindi. It is also an occasion of personal happiness for Rajkamal Prakashan as the translation of a work published by us has been awarded by the International Booker Prize Committee. We congratulate Geetanjali Shree and the whole literary world for this award