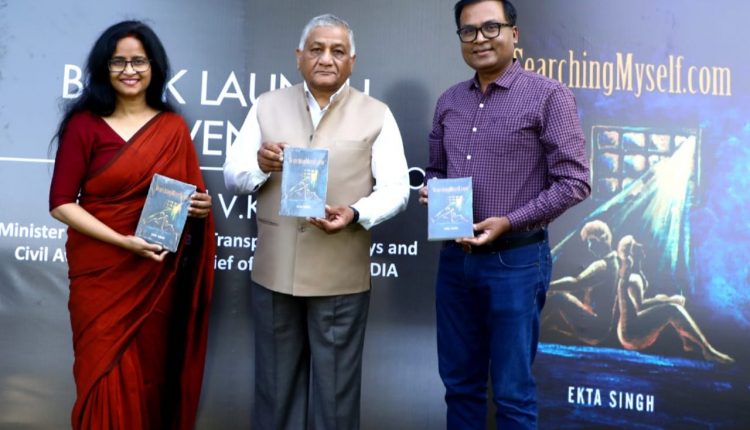 This book is published by Times group, the well known publisher. In the event, Dr Ekta Singh said that the book is a work of fiction and revolves around the story of a young adult Kundan. But the real objective of the book is to convey messages that have the potential to make life happier and healthier.

While launching the book “Searchingmyself.com Gen V K Singh said that the book explores human psychology and life philosophy in a scientific way.

The core idea of the book starts with a question, ‘what do we want to achieve in our life?’ This question has been asked during a discussion among the group of few youngsters; an IITian, a yoga instructor, a medical student, an MBA, a student of BA second year and a gynaecologist, she added.

The book goes into three segments; first, morning sessions, having the discussions about few basis aspects of life among the fore-mentioned aspirants. Second, college campus, having the glimpses of life of a medical college campus along with a well connected story of a inter college basketball tournament. Third is a diary writing by Kundan including the gist of his daily learnings.

While she excelled in her studies, her mind veered around subjects which were more akin to existential questions. Why don’t we teach about the nature of the self? Why does misery and sorrow follow without discrimination on all beings? What is death? How does the mind deal with such distress? All these were questions that needed answers, yet, she wanted a scientific basis to such answers.

According to her, this book is not only for those who have faith and love for the unseen power. It is rather for likeminded friends, for whom faith is not independent of logic and evidence. This book is her quest in that dry path.

This book is must-read for those who dangle between rationality and spirituality, without being able to accept either.

The launch of the book was followed by a discussion in which the author took questions. The 303-page book has been published by Times group and is available on Amazon.

India Education Diary Bureau Admin May 18, 2022
Pune : FLAME University has opened its July 2022 intake for PhD programs being offered in the areas of Data…

Cornell University: A new approach to student conduct at Cornell