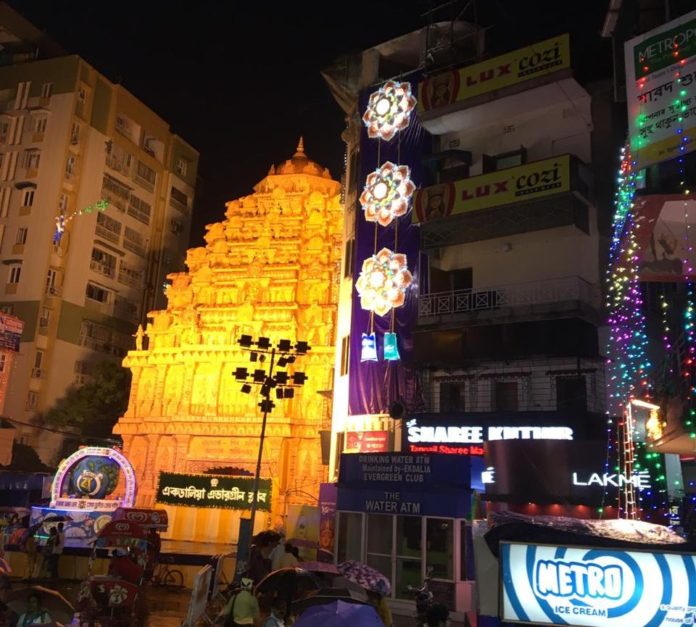 Today on the auspicious occasion of Maha Tritiya, the Giant ‘Chandmala’ was inaugurated with much fanfare.The Giant Chandmalais 32 feet in total height consisting of 3 discs of size 8 feet in diameter each. Each disc comprises three layers.

The distinctive installation of the Largest Chandmala is under consideration for an entry into The Limca Book of Records 2020.

The guiding thought behind this initiative was that the enormous size and the fascinating beauty of the giant “Chandmala” would invoke an urge in the minds of people at large to revisit the art form of Chandmala and Shola.With a vision to bring back the glory of the artisans who always remain behind the scene, JSW Cement has taken a pledge to extend a helping hand to these underprivileged artists throughout the year. This year, JSW Cement is giving monetary support to a couple of families who are traditionally into Shola Art.

Commenting on the initiative, Mr. Jerry Lawrence, State Head- West Bengal said, “Today, Durga Puja has transformed from only being a religious festival to a social celebration in Kolkata, Durga Puja has takenthe centre-stage for showcasing artistic brilliance. It is astonishing to see how the craftsmanship surpasses the excellence of creativity every year. However, with the explosion of themes and artistry some traditional arts are getting languished. ‘Chandmala’ making is one such example of distressed art. JSW Cement conceptualised this initiative to install the Giant ‘Chandmala’ to create awareness about this distressed art and glorify this art form which is actually an integral part of any Hindu ritual.”

“JSW Cement believes in respectful restoration of this art form so that the Chandmala artists get back their lost self-reliance.It is our aim to feature the Chandmala installation in the Limca Book of Records as it will help encourage the artists,”Mr. Jerry Lawrence further added.

University of Sheffield: New standards for tax transparency published for governments around the world

Queen Mary University of London: Only 1 in 5 Syrian children...