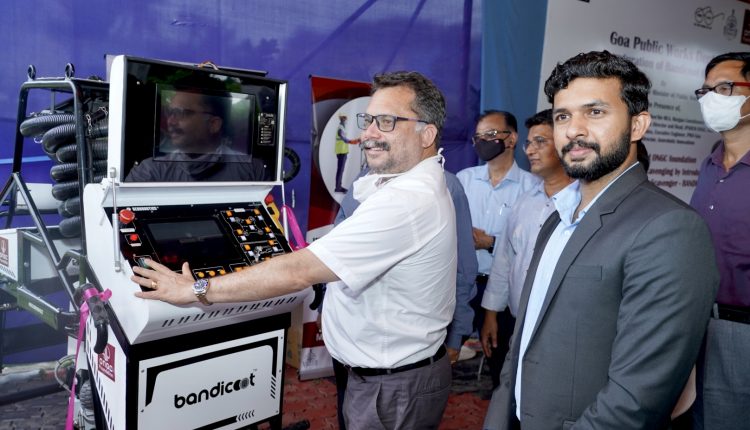 After Vijayawada MC in Andhra Pradesh and Khambhat Nagarpalika in Gujarat, Margao PWD in Goa switched to Robotic Scavenging as an initiative of ONGC Foundation to ensure safety of the sanitation workers during the cleaning and maintenance of city manholes.

Now Goa becomes the 15th state in India to eliminate manual scavenging with Bandicoot robots.Manhole cleaning requires human entry for their effective cleaning, but human entries are death traps due to harmful gases present inside the manholes.

This initiative gives safer and more dignified jobs for the sanitation workers as robot operators with training and rehabilitation programs.

“This advanced robotic technology is capable of eliminating the existing problems faced by sanitation workers while cleaning manholes in Goa. We are looking forward to implementing this project across the Goa state.” Shri. Nilesh Cabral, Hon’ble Minister of PWD added.

“Goa is always a tourist hub for Indian and foreign travellers. Maintaining the hygiene of the city requires more efficiency than before.” Rashid K, Director of Genrobotics said, “We are happy to work with PWD Goa to add more safety to the sanitation workers and help Goa become a robotic scavenging state in the near future”

Recently Zoho Corp invested Rs.20Cr in Genrobotics – a national award winning start-up, along with other investments from industrialists like Anand Mahindra and Rajan Anandan, to scale up the Bandicoot robots across India.

The Bandicoot robot is the world’s first manhole cleaning robot developed by the MakeInIndia and Swachh Bharat initiative by National Award-winning startup Genrobotics.

Bandicoot robot comes with a human-comparable robotic arm and various sensors that help the robot to perform the cleaning action more efficiently. These robots are also featured with special 4 IP68 waterproof cameras to clean the manholes in a more precise and efficient manner even under low light conditions. Bandicoot robotic technology is an AMRUT Tech Challenge Award winner as a Promising Innovative Solution for eliminating manual scavenging by the Ministry of Housing and Urban Affairs, Government of India.

Manual scavenging has always been a major social issue, reporting one manual scavenger death every five days in India. To address this issue, Genrobotics invented the World’s First Robotic Scavenger – Bandicoot, to completely eliminate human entry inside manholes. Recently Zoho Corp invested Rs.20Cr in Genrobotics, along with other investments from industrialists like Anand Mahindra and Rajan Anandan, to scale up more Bandicoot robots across India. Various other PSUs and private institutions have already partnered up with Genrobotics to eliminate manual entry into the manholes and bring more safety to the sanitation workers.

The Bandicoot robotic technology is developed for ending manual scavenging by Genrobotics. The project was implemented with a vision to help improve the safety and dignity of sanitation workers and bring positive changes to the sanitation workers’ community. The Bandicoot Robotic Technology is designed to mimic and replace the entire human requirement inside the manhole for efficient cleaning. Bandicoot Robotic Technology is an AMRUT Tech Challenge Award winner as a Promising Innovative Solution for sanitation by the Ministry of Housing and Urban Affairs, Government of India.

Genrobotics is aiming at providing robotic solutions globally, in hazardous and extreme environments such as sewer manholes, STPs, refinery petroleum tanks and oil pits etc by exporting their robotic technologies to other ASEAN countries including Malaysia.

How does a Bandicoot Robot work?

Bandicoot robots can do every action a human can perform inside the manhole, and also it can clean manholes more efficiently and effectively than a human by using the most advanced technologies like robotics and AI. It is also equipped with poisonous gas sensors which help the operators to know the presence of poisonous gas inside the manholes, Poisonous gases are the most common reason for manhole accidents.

Bandicoot can converge its diameter by using its legs to enter into the unseen depths of the manholes and after entering the manholes it will use its legs to move and gain more stability inside the manhole while pulling out the solid waste materials. Its specially designed robotic arm is to perform multiple operations such as shovelling, grabbing and pulling the wastes even from the corners of the manhole, which helps the liquid waste to flow through the sewer system naturally, This procedure is more efficient in cleaning manholes than any other conventional cleaning methodologies.

The robot has specially designed four-night vision, water and sewerage proof cameras so the depth and darkness of manholes won’t be a threat anymore for cleaning the manholes. After collecting all the wastes using its robotic arm from every corner, its intelligent bucket system will collect the wastes and pull them out from the Manhole. The bandicoot robot can be electrically powered through direct electricity, generators or batteries.

The robot’s simple controls made it easier for the sanitation workers and it comes with inbuilt training assistance that helps the sanitation workers to learn the operation through symbolic graphical representations. The operator can use the Robot with a single touch of control and with the ease of playing a mobile phone game. Bandicoot can also be used for inspection of manholes;

iednewsdesk Jun 17, 2022
One of the stalls within the new science area at this year’s Glastonbury Festival (22-26 June) will invite…

Bharti Foundation to bolster schooling experience in partnership with…

Aston University: Hundreds of Birmingham schoolchildren gearing up to…