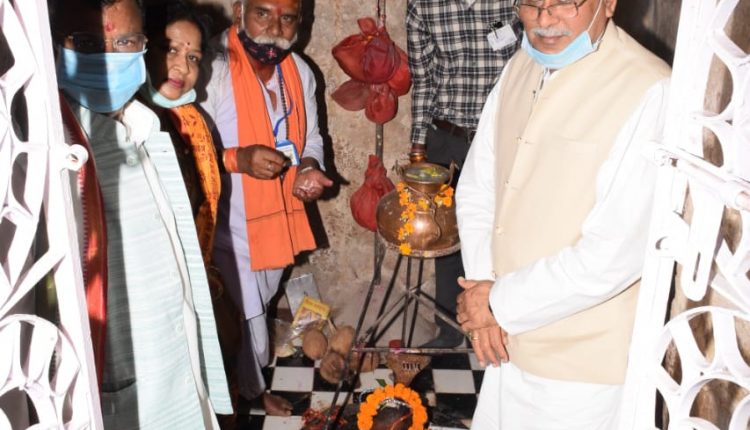 Raipur: Chief Minister Mr. Bhupesh Baghel today visited Karneshwar Dham, situated in the lap of Sihawa mountain in Nagri forest area of Dhamtari district. This is the first time that a Chief Minister of the state visited the fair organized there on the occasion of Maghi Punni. He performed the customary rituals in Shiva temple built in eleventh century by Somvanshi King Karnaraj. He also visited other temples and prayed for the progress and prosperity of people in the state. On this occasion, Chief Minister inaugurated the main gate newly constructed by Karneshwar Mahadev Trust. Chief Minister, in his address on the occasion, directed the collector to give community forest rights certificates to the gram panchayat to solve the venue problem for organizing Karneshwar Mela near the point of origin of Mahanadi, the lifeline of the state, and ‘Tapobhoomi’ of Saptrishi.

On this occasion, Chief Minister Mr. Baghel also announced opening of a nationalized bank in Sihawa region, sanctioned Rs 10 lakh for pond beautification work, and also approved construction of 800 meter paved road in Deurpara. Besides, he also announced that the government high school in the city will be named in memory of the martyr Shri Abhishek Golcha of Jheeram Valley. Under Ram Van Gaman Path circuit, tourism will also be developed in Sihawa region.

On this occasion, Excise and Industry Minister and Minister in-charge of the district, Mr. Kawasi Lakhma, in his brief address appreciated the development works being done in the state under the leadership of Chief Minister Mr. Bhupesh Baghel. Sihawa MLA and Vice President of Central Region Tribal Development Authority and ex-officio Patron of Karneshwar Mahadev Temple Trust Dr. Lakshmi Dhruv thanked Chief Minister on behalf of the people of the area. He also gave information about various government scheme being run in the state for common people, farmers, youth and women and for the development of the state in last two years. On this occasion, Chairman of Karneshwar Mahadev Temple Trust, Shri Vikal Gupta, while reading the greeting letter, placed various demands before the Chief Minister.

On the occasion, Chairman of Civil Supplies Corporation Mr. Ram Gopal Agrawal, District Panchayat President Mrs. Kanti Sonwani, Mayor Municipal Corporation Dhamtari Mr. Vijay Dewangan, former MLA Dhamtari Mr. Harshad Mehta, former MLA Sihawa Mrs. Ambika Merkam, Mr. Ashok Som Sharad Lohana other public representatives, members of the trust and villagers were present. It is noteworthy that Punni Mela is being organized in the month of Magh for many years in Karneshwar Dham near Sihawa mountain and Shringarishi’s Tapobhumi, the place of origin of Mahanadi, where devotees from afar come and take a dip in the holy confluence of Balka and Mahanadi. In this holy place of worship, there are temples of Lord Shiva, Ganesh, Vishnu, Vishwakarma besides Maryada Purushottam Rama and Janaki.