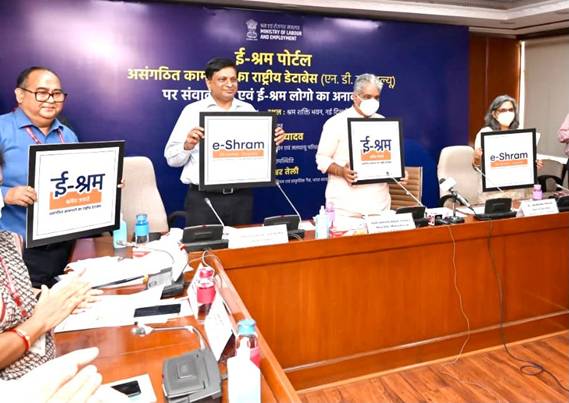 New Delhi: Unveiling the logo for the E-Shram portal , Minister for Labour and Employment, Shri Bhupender Yadav today said that that targeted identification of the unorganized workers was a much needed step and the portal which will be the national database of our nation builders, our ‘Shram Yogis’, will help take welfare schemes to their doorstep, who are the builders of our Nation.

Speaking at an event in New Delhi which was attended by all major Central trade union leaders, the Minister informed the gathering that the portal will be launched on Thursday i.e 26th of August. “Targeted delivery and last mile delivery, has been a major focus of the schemes of government of India under the leadership of Prime Minister Shri Narendra Modi and the National Database of Unorganised workers(E-Shram portal) is another key step towards that”, and will be a game changer for the social security of Millions of Unorganised Workers said the Labour Minister.

The meeting was also joined by Shri Rameswar Teli, Minister of State for Labour and Employment from Dibrugarh,Assam via video conferencing who said that the launch of the portal will be a major milestone for the unorganized workers, the domestic workers, the construction workers,the migrant workers, Gig & Platform workers etc. and will ensure that welfare schemes reach the right beneficiary at the right time across the length and breadth of the country.

All trade Union leaders extended their full support for the successful launch and implementation of the e-shram portal and the Union Minister thanked the union leaders for their valuable and constructive suggestions and emphasised that they have a key role towards speedier registration, implementation at field level and taking the portal to the unorganized workers.

The Minister also presented them a portrait of the tableau of the labour Ministry which dawned the Rajpath on India’s 72nd republic Day. The art which is a celebration of all-round well-being and security of the workers portrays the transformation that will come into the life of organised and unorganised workers after the implementation of the recent labour codes.