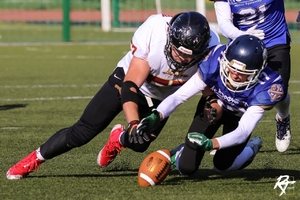 “Gunsmiths” won the Second League of the Russian Championship

The national team took part in the Second League of the Russian American Football Championship from May to August. In the season, the rivals in the North division were teams from Tula, St. Petersburg, Moscow, Penza, and in the final – from Nizhny Novgorod. A total of 9 teams participated in the league.
The beginning of the final game was difficult. During the break, when the “Gunsmiths” were losing with a score of 18:30, work was done on the mistakes. The coach of the team, S.V. Kornev made tactical adjustments to the game of defense and attack. This allowed first to equalize the score, and then to take the lead and win with a score of 50:30.

Now the team is preparing for the autumn tournament in Vologda and is starting to recruit newcomers to the team.

Associate Professor of PetrSU – laureate of the All-Russian competition

Jubilant J&K : ‘One Beat Guard One Village’ programme to…