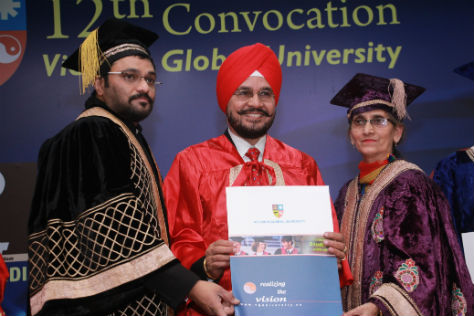 The Doctorate was conferred in recognition of his contribution to the print media and advertising industry and has been instrumental in exploring potentials of J&K market among all categories of advertisers throughout the country.

Dr. H.S. Paul has made a name for himself. He is not only a favourite among publishers associated with him but also finds favour among publishers of competitive publications. Since 1989 Dr. Paul is working as a Regional Head (North India) and Delhi Bureau Chief for Daily Excelsior – Largest Circulated English Daily of J&K. Over the last 30 years, Dr. Paul’s contribution to the advertising industry has been recognized and awarded by Publishers of Mayapuri, Lotpot, Filmi Kaliyan, Nutan Kahaniyan, Cricket Samrat, Jaltedeep, Manak, Competition Master, Daily Excelsior and many other highly reputed professional/social organisations. Dr. Paul is highly respectable among Advertisers and Advertising Agencies of Northern India for his know how of the profession.

Seven other people were conferred Doctorate Degrees for their extra ordinary contribution to their related profession. The play titled “Save & Educate Girl Child” and musical programme were the attraction of the event.