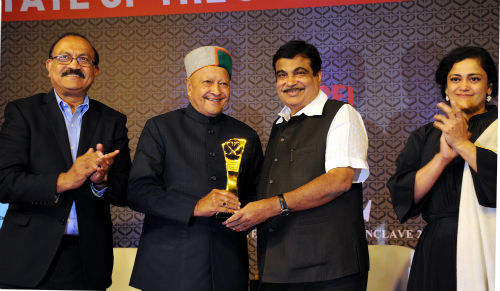 Report by Vijyender Sharma, Shimla: Himachal Pradesh has been conferred upon Best State Award in the Big States category in the sectors of education, infrastructure and overall development by India Today Group.
Chief Minister Virbhadra Singh received the award from Union Minister for Road Transport and Highways Nitin Gadkari at India Today State of the States Conclave-2017 organized by the India Today Group at New Delhi, today.
Delivering his address on “The politics of development: My turn around story” on this occasion, Virbhadra Singh spoke about the journey of Himachal Pradesh on the path of development since its formation. He expressed his gratitude to leaders like former Prime Minister Pt. Jawaharlal Nehru and first Chief Minister of the State Dr Y.S Parmar, who laid strong foundations for the emergence of Himachal Pradesh as a developed state.
He said that Himachal Pradesh started its journey from a scratch but today it has emerged as a model of development for other states and has been competing with big states on the development and growth indicators. In past also, efforts of the state have been lauded at National level and it won many awards too, he added.
Emphasizing upon the importance of States, he said that in a democratic country like India, States should be strengthened to make the Nation strong as developed States contribute to a strong central government.
Virbhadra Singh said the present Congress government in Himachal Pradesh has concentrated on equitable and inclusive development from the very first day. The poor, downtrodden, weaker and vulnerable sections have been given special attention. He mentioned that Himachal has achieved spectacular progress in core areas of health, education and equitable development of infrastructure with special focus on the poor and under privileged. The State has adequate educational and health institutions besides road connectivity and tourism and industries sectors were also growing considerably.
He lauded the India Today Group for the efforts and encouraging states by appreciating the good work done by them.
Editorial Director of India Today group Raj Chengappa welcomed the chief guest and others on the occasion.
Health Minister Kaul Singh Thakur, Industries Minister Mukesh Agnihotri, MLA Asha Kumari and Chief Secretary V C Pharka were present in the function.