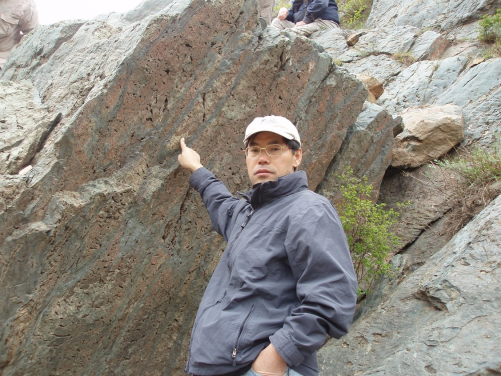 The World Academy of Science (TWAS) for the Advancement of Science in Developing Countries has announced the 2021 newly elected TWAS Fellows, of whom Chair Professor Guochun ZHAO from the Research Division of Earth & Planetary Sciences and Department of Earth Sciences, Faculty of Science, the University of Hong Kong (HKU), was elected as a Fellow in recognition of his outstanding contributions to earth sciences and science promotions in developing countries. This year, 35 new Fellows from 22 countries were elected. Professor Zhao is the only Chinese scholar among the three new members in Astronomy, Space and Earth Sciences bestowed with the honour.

Focusing on Precambrian geology and formation and evolution of supercontinents in Earth’s history, Professor Zhao is delighted to be recognised with this exceptional honour. He said: “My election as a TWAS member represents the international recognition of my academic achievements and contributions to science promotions in developing countries. I would like to show my gratitude to HKU, Northwest University (Xi’an), Hong Kong RGC and China NSFC for their long-term financial supports for my research. I would also like to thank my collaborators and my research group who have been working hard with me for all these years.”

University of Birmingham: Optical cavities could be key to…

HKU Dean of Science Professor Matthew Evans congratulated Professor Zhao on his being elected as the Fellow of TWAS. “This honour is not only an international accolade to Professor Zhao in recognition of his distinguished achievements in the field, it is also a testament for the Faculty’s pursuit of research excellence, and further evidence of our impact and research standing in the world,” said Professor Evans. Professor Zhao is the third scholar at the Faculty to receive the honour. The other two Fellows are Professor Chi Ming CHE and Professor Vivian Wing Wah YAM.

About Professor Zhao Guochun
Professor Guochun ZHAO is the Member of Chinese Academy of Sciences (CAS). He obtained his BSc and MSc degrees from Changchun University of Earth Sciences (now merged into Jilin University) in 1985 and 1988, respectively, and his PhD degree from Curtin University (Australia) in 2000. He is now a full-time professor of Earth Sciences at The University of Hong Kong and a Changjiang Scholar professor (short-term) in the Department of Geology of Northwest University (Xi’an). Professor Zhao’s main research fields are metamorphic petrology, Precambrian geology and supercontinents. His major research achievements are discoveries of two 1.95-1.85 billion years old continental collisional belts in North China, recognition of global-scale 2.0-1.8 Ga collisional events leading to the assembly of a supercontinent and a new reconstruction of East Asian continental clocks in Pangea. According to All Database of Web of Science, Professor Zhao’s record in the field of Geosciences includes 350 papers cited for more than 42,000 times (h-index = 115), ranking number 40 among 4,258 top 1% geoscientists. He has received many awards, prizes and honours, including State Natural Science Award (Second Class; First Awardee; 2014), Fellow of Geological Society of America (2014), Highly Cited Researcher Award of Thomson Reuters (2014-2020), Outstanding Researcher Award of The University of Hong Kong (2016), 29th Khwarizmi International Award (First Class; 2016), Chair Professorship of Cheung Kong (Changjiang) Scholars Program (2017), Thousand Talents Plan (Short Term; 2017) and TWAS Prize in Earth, Astronomy and Space Sciences from The World Academy of Science (2018). Professor Zhao is also the Editor-in-Chief of Precambrian Research, a leading international journal in earth sciences.

University of Birmingham: Optical cavities could be key to next generation…