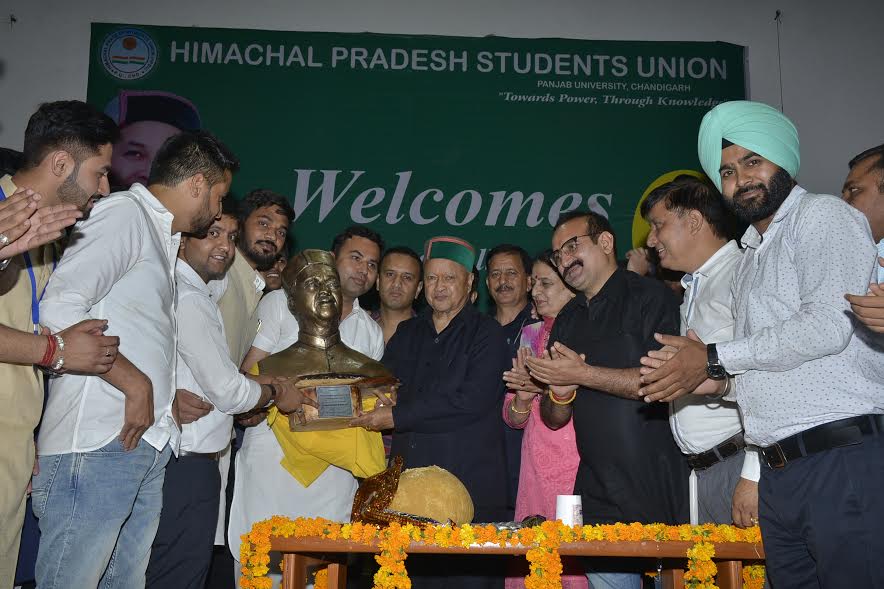 Shimla: Himachal Pradesh student Union (HPSU) of Punjab University Chandigarh, today organized a cultural event “Ek Sham Himachal Ke Naam” at Punjab University. Himachal Chief Minister Virbhadra Singh was Chief Guest on this occasion.
Addressing the students, Chief Minister said youth have been flag bearer of culture of society and they should carry forward the traditions and values of the region.
Shri Virbhadra Singh called upon the students to do their best in the field of education as well as in strengthening cultural roots of their state. He said Himachal is known for its centuries old rich cultural heritage and it was the duty of every individual to protect and forward it to the coming generations. ” We should not forget our culture, values and traditions. People who forget their culture are forgotten by the society and even lost”, said Chief Minister”.
He asked the students to gain best possible knowledge for progress in individual life and for the society as well. He said, ” I wanted to become a Lecturer or Professor of University and was interested in teaching profession. In spite of this, I worked earnestly for the welfare of the people of Himachal Pradesh”.
Shri Virbhadra Singh said that his government has always accorded top priority to the education sector and as many as 47 new colleges were opened in the state most of them in rural areas during present regime of the government. The motive behind it was to enable the rural students particularly girls to get higher education nearer to their homes.
He said Punjab University was known for academic excellence and produced scores of talented persons in every sphere of life.
Chief Minister announced Rs. 4 lakh from his discretionary grant to HPSU for cultural promotion.
Chief Minister also released calendar of HPSU
Vice Chancellor of Punjab University Prof. Arun Kumar Grover said that Punjab University has been heritage of entire north-west region of the country and products of this university had time and again proved it. He said that the people of the region had tremendous trust and faith in the functioning of Punjab University.
President HPSU Sanjeev Negi said that this organization was formed in the year 2002 to bring the Himachali students at Chandigarh to a common platform for promotion of culture, besides all round development of the students.
Vice President HPSU Shrishti Sharma said that empowerment of youth was necessary for betterment of the society.
Chairman Agriculture Marketing Board Subhash Manglet, Chairman State Disaster Management Rajender Rana, Vice Chancellor Baba Freed University Dr. Raj Bahadur, Former Mayor Chandigarh Lalit Joshi were also present among large number of students.