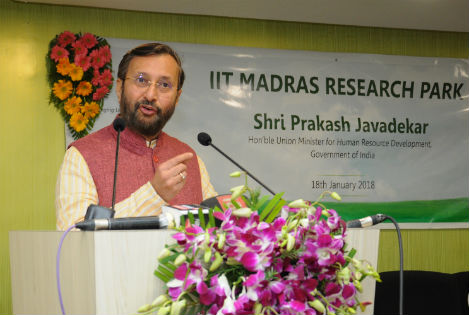 “We’ve provided funds for several IITs to set up such Research Parks. We’ll set up a committee to ensure the efforts of IIT Madras is replicated everywhere else. This is what the New India that the Honourable Prime Minister Shri Narendra Modi is talking about,” he said.

“Industry Academia collaboration has been talked about a lot but here it is being done effectively. There are startup companies, innovators and corporates in an ecosystem of innovation. They’re enthused by the innovation of others in this ecosystem,” he said.

Shri Prakash Javadekar said that Incubation Cells, like the one at IIT Madras, are the real key to ‘Make in India.’ Now, by seeing the IIT Madras experiment, many Indian companies and universities are now funding research in India rather than funding research abroad. The Minister also lauded the facilities at the IIT Madras Research Park, which was completely eco-friendly.

Shri Prakash Javadekar said, “We’re having a big campaign of ‘Smart Campus,’ which aims to ‘Save, Conserve and Recycle Water’ besides ‘water harvesting.’ The research being done at such premier institutes is to carry out ‘Relevant Research.’ The second aspect of this Smart Campus is ‘Save and generate electricity.’

IIT Madras is home to India’s first university-driven Research Park. It was modelled along the lines of successful Research Parks in Stanford University, Massachusetts Institute of Technology and Harvard University.

Speaking on the occasion, Prof. Bhaskar Ramamurthi, Director, IIT Madras, said, “The Research Park is a game-changer for the faculty and students of IIT Madras as well as the companies collaborating with us. The alchemy created by the coming together of faculty, students and professionals from industry has led to many disruptive innovations, exemplified by the award-winning start-ups emerging from the Incubators at the Research Park.”

Prof. Ashok Jhunjhunwala, Faculty-in-charge of IITMRP, and Principal Advisor, Ministry of Railways, Government of India, gave a presentation on the Research Park and its achievements since its inception besides its future plans.

“An important component of the eco-system to make India a nation which design, develops, owns, manufactures and commercialise products, will be University-associated Research Parks (RPs). These Research Parks could take the industry-academia interaction to a new height,” said Prof. Ashok Jhunjhunwala.

IIT Madras Research Park’s vision is to build a community of people to Dream, Ideate and Build enterprises of the future. With its Green, Modern and Sustainable Technology Park Eco-system, it invites entrepreneurs and industry leaders to establish their R&D units in IITMRP and leverage the intellectual infrastructure of IIT Madras to deliver global innovations of the future that can transform and impact society. IITMRP is also in talks with other corporates and PSUs to set up their R&D units in Phase II.

The IITMRP has reached a significant milestone through the Phase II building: offering total infrastructure of about 1.2 million sq. ft. to companies to set up their Research facilities in close proximity to and leverage IIT Madras’ expertise and R&D infrastructure.

Of the combined 140+ tech startups incubated at IIT Madras Incubation Cell (IIT MIC), early stage ventures are housed within incubator premises while others are renting independent offices in IIT MRP (subsidized rentals offered to incubated startups). As much as 35,000 sq.ft. space is dedicated for IIT M incubators and incubated startups.

Since 2006, 140 startups have been part of IITM Incubation Cell (including sector-specific IITM’s Rural Technology & Business Incubator, Bio-incubator & MedTech incubator). Of these, 32 startups have raised Rs 707 crore (US$ 111 million) from investors.

Furthermore, 63 IITM incubated startups are currently in the market, with a cumulative revenue of Rs 133 crore (US$21 million) generated in financial year 2016-17.

IITM startups are making National Impact as well: On 27th September 2017, the Honourable Prime Minister Shri Narendra Modi launched ‘Saubhagya’ scheme, which aims to complete electrification of India by December 2018. The work emerged from research at IIT Madras, with implementation/commercialization being carried out by three IITM startups: Intelizon, Cygni Energy and Chakra Networks.

IITMIC provides ‘concept to scale-up’ support technology and knowledge-based startups through a holistic ecosystem with access to:

“Yamini 2018” – an exquisite treat for classical music and dance lovers, at IIM Bangalore