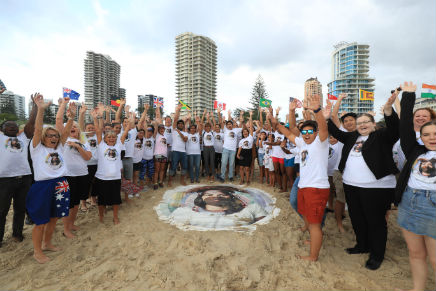 In a joyful celebration of cultural diversity, Indian students this morning (Wednesday 4 April) were among hundreds of fellow international students, Gold Coast locals and visitors toform a symbolic Human Rainbow.
With the rising sun providing a stunning backdrop at iconic Kurrawa Beach — in the Gold
Coast suburb of Broadbeach — the rainbow was a moving acknowledgment of multicultural
strength and acceptance. It was especially fitting given the Gold Coast 2018 Commonwealth
Games officially begins later today.
The Human Rainbow was part of Study Gold Coast’s Embracing Diversity campaign, which is
showing the world why the Gold Coast is the ideal destination for domestic and
international students. The Gold Coast is currently home to 25,000 international students
from 130 nationalities and was recently named as Australia’s number one regional study
destination.
Griffith University students and sisters Nicole and Alexia David, from India, said the Gold
Coast was a melting pot of diversity.
“I have lived on the Gold Coast for three years now, with friends of varying ages, cultures
and ethnicities. We have so many different passions and aspirations, and yet we can pursue
our dreams together, as friends, on the Gold Coast,” Nicole, who is study medical laboratory
sciences, said.
“Everyone is so accepting, understanding and caring that I have grown to accept the Gold
Coast as my home away from home.”
Alexia said being part of the Human Rainbow was about sharing their culture and a way of
meeting new friends.
“I wanted to be part of this, with so many people coming together – it’s such a good feeling,”
Alexia said.
There are currently 68,000 Indian students in Australia — a seven-year high — with the Gold
Coast’s Bond University recording one of the nation’s largest student increases in 2017.
India is one of the top five countries in the Gold Coast’s international student cohort.
Study Gold Coast CEO Shannon Willoughby said the Gold Coast was a richly diverse
multicultural society with almost one-third of its residents born overseas.
“Our city is a welcoming one with such a vibrant student population,” she said.
MEDIA RELEASE
studygoldcoast.org.au
“Our Human Rainbow was driven by our students who wanted to acknowledge and
celebrate the Gold Coast’s multicultural community.”
“It’s such a beautiful and vibrant visual metaphor for unity through embracing diversity in
our community. It embodies the spirit of the city and the Commonwealth Games. I can’t
think of a better day to hold this event than on the first morning of the Games, and as tens
of thousands of visitors are joining us.”
Also joining the Human Rainbow was Minister for Innovation and Tourism Industry
Development and Minister for the Commonwealth Games the Honourable Kate Jones MP,
who said: “A welcoming environment, both people and place, are the foundation for great
student experiences”.
“That is why we are working with Gold Coast to cement its place as one of Australia’s
leading student cities and the legacy of Games infrastructure such as improved transport
and accommodation will enable a great platform for growth,” she said.
India has a team of more than 200 athletes at the Commonwealth Games and they will
receive plenty of support from their Gold Coast-based countrymen and women.
The Gold Coast is expected to welcome more than 670,000 visitors during the
Commonwealth Games, along with a television audience of 1.5 billion. The biggest event in
the Gold Coast’s history, it is also the largest sporting event in Australia this decade.