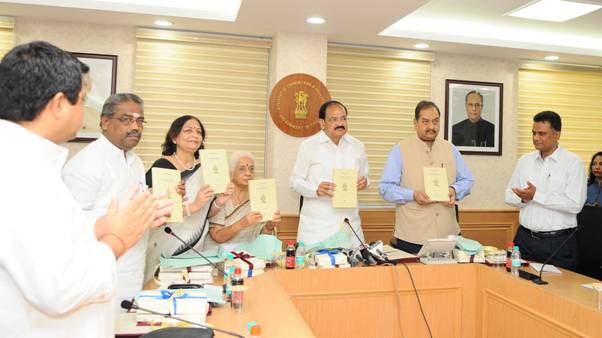 New Delhi: Minister for Information & Broadcasting, Shri M Venkaiah Naidu, has said that Mahatma Gandhiprovided valuable lessons of Humanity, Compassion and Determination to the “Young Minds”. It gave the Generation Next an opportunity to understand the essence of his philosophy “My Life is My Message”. The young generation ought to understand the spirit and intent of the supreme sacrifices made by our freedom fighters from across the different regions in the country. To carry the message of Gandhiji forward, bookson his Ideas and Teachings must be made available to readers for inspiration. The Minister stated this while releasing the Heritage book Gandhi in Champaran Published by Publications Division in collaboration with National Gandhi Museum, New Delhi. Ms AparnaBasu, Chairperson National Gandhi Museum and senior officials from the Ministry were also present on the occasion.
Referring to recent Mann Ki Baat address where the Prime Minister himself spoke on the importance of Champaran movement and Gandhiji’s struggle, Shri Naidu mentioned that Champaran Satyagraha was first Non Violent Jan Andolan that Mahatma Gandhi spearheaded in India. The struggle at Champaran became the inspiration for future struggle for India’s Independence.
Complimenting the efforts of Publications Division in restoring and re-publishing Heritage archival literature, Shri Naidu said that the Government had always aimed to mainstream the ideals of Mahatma Gandhi by working towards the welfare of the poorest of the poor. He also mentioned that Publications Division should strive to restore and publish other relevant literature& publications related to GandhijiandRegional Freedom Fighters. The books onGandhiji would provide a further fillip to the Flagship Schemes of the Government such as Swachh Bharat Abhiyan, Jan DhanYojana and Skill India which have been aimed at bringing about equality and empowerment.

Regarding the books released, the publication “Gandhi in Champaran” would bring to the contemporary reader an account of that important phase of Indian struggle for independence. The book aims at reliving, recounting & retelling the experiences that have had a deep impact on Gandhi and how it had shaped the course of our nation’s history.
The Minister also released two other titles namely, Romain Rolland and Gandhi Correspondence and Mahatma Series (8 volumes) by DG Tendulkar, published by Publications Division. The book “Romain Rolland and Gandhi Correspondence” is a collection of letters, diary extracts and articles of Romain Rolland’s correspondence with and about Mahatma Gandhi and other writings, including extracts from his diary. The book “Mahatma Series ( 8 volumes)” is a biography of Mahatma Gandhi, conceived and written by DG Tendulkar during the lifetime of Bapu which has been restored from the edition revised by the author himself and published by Publications Division in the early sixties.
All these restored titles were published in the 1950s and 60s and gave the most authentic account and description of that iconic Freedom Struggle which has shaped the destiny of our nation.

iednewsdesk Jun 25, 2022
UC and CHRISTUS Health renewed their agreement signed in 2016, with the aim of continuing to work together for…