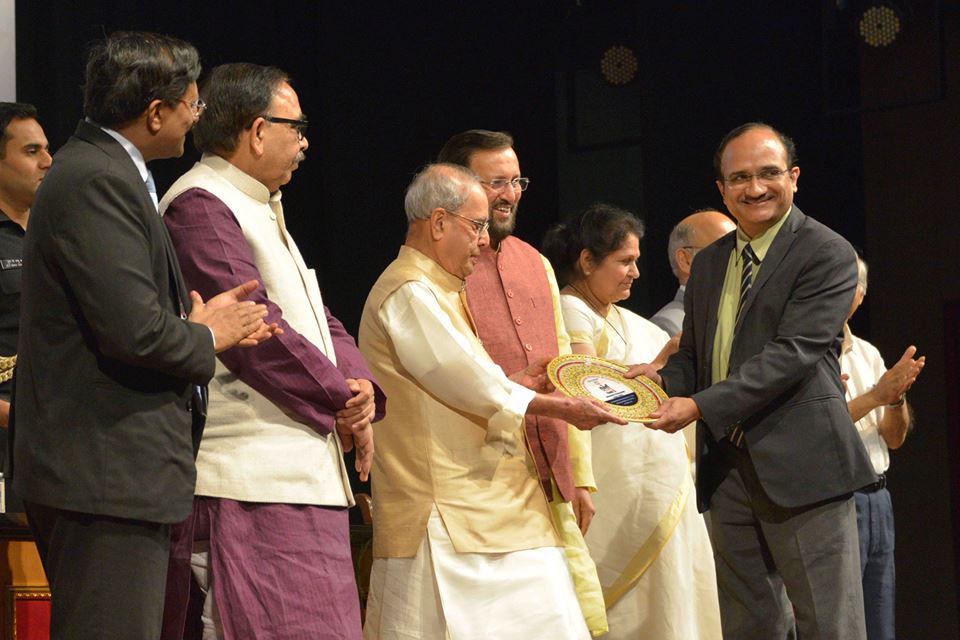 New Delhi: President Pranab Mukherjee today presented awards to top-ranked institutions in the NIRF Ranking 2017 i.e. top 10 in overall category and toppers in the stream-wise categories -Engineering, Management, Universities, Colleges and Pharmacy at a glittering ceremony held in Rashtrapati Bhawan, New Delhi. Speaking on the occasion Shri Mukherjee said the higher education sector in India has seen massive expansion during the last two decades. The number of Universities, Degree Colleges, IITs, NITs, etc has increased but certain issues remain to be addressed. The first issue was regarding the lack of availability of quality teachers. The second was the problem of retaining our talents in our country. Bright students every year go abroad as they consider that the facilities, environment and opportunities abroad are superior. In ancient times, the situation was reverse when our Universities attracted the brightest students as well as teachers from all over the world.

Shri Mukherjee said he is happy to see that during the last two years, two Indian institutions have figured in the top 200 in international rankings. He said that he believed that our institutions have all the qualities necessary for being ranked high. He said that the National Institutional Ranking Framework (NIRF) started by the Ministry of HRD and now in its second year is a laudable initiative and will help our institutions to realize their potential and emerge as world class institutions. Shri Pranab Mukherjee also released the India Rankings 2017 report.

In his key note address Human Resource Development Minister Shri Prakash Javadekar said that National Institutional Ranking Framework (NIRF) has become a grand success and the whole country is debating about including this including print, electronic and social media. TV channels, Radio and News papers and Advertisements. He said it is a right spirit as it is an effort to improve the quality. It is different from NAAC because NAAC is an accreditation and assessment of stand alone institutes.

Shri Javadekar cited to his recent meeting with the vice chancellor of Goa University wherein instructions to appoint a committee to review the University’s standing in the NIRF ranking were issued by the University administration. The Minister said its all about collective efforts to improve the quality, overall quality index and higher education and that is what is required. The Minister invited the suggestion from the Head of Institutions for bringing in new benchmarks and rendering of new services and facilities. He said in next two month all suggestions received will be evaluated to bring in a comprehensive rating that will sustain for more than a decade to have very robust ranking framework. He expressed the hope that the improvised framework will have a world wide acceptance.