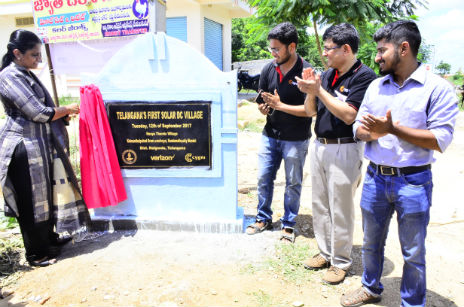 IIT Madras developed this Solar Technology, which was technology transferred to and commercialized by Cygni Energy Private limited, an IIT Madras-incubated firm, which also carried out the installations. Verizon provided financial assistance of Rs. 75 lakh under Corporate Social Responsibility (CSR) for this project.

Ramunigundla Thanda, Kesya Thanda, Jogi Thanda and Mantriya Thanda are four rural hamlets of Devarakonda Mandal in Nalgonda district, Telangana. Predominantly dependent upon paddy and cotton farming for livelihoods, the hamlets are about 100kms from Hyderabad, located on Nagarjunsagar Road near Mallepalli.

These hamlets together have around 300 households, most of which fall under ‘Low Income’ Category. They have been suffering from frequent power outages, especially during monsoons and ‘peak-demand’ times.

The Inverterless System, comprising a 125Wp Solar Panel, a 1kWh battery, an Inverterless controller unit and DC loads operating on a 48V DC internal distribution line, were installed in all houses. It powers a DC fan, a DC tube light, two DC bulbs, a DC mobile charger, a DC power socket and a remote controller to operate the fan and tube light.

Installations were completed by June, 2017 and everything has been working flawlessly. The performance and health of all the installed systems are being monitored remotely, with data being collected via mobile phones and synchronized to a central server.

The project was implemented under the aegis of Prof. Ashok Jhunjhunwala, Principal Advisor, Ministries of Power and New and Renewable Energy, Government of India, and Professor (On Sabbatical), IIT Madras.

He said, “Today, millions of homes in India either do not have grid connectivity, or suffer from power outages for large fraction of the day. This is a very serious challenge as majority of these homes fall under low-income category and cannot afford power even with some subsidy. Solar DC Inverterless technology deployed in the 300 homes of Devarakonda, Telangana tackles this problem and shows how, with a small 125W solar panel on the home rooftops, the dynamics of electricity in India could be transformed. This project heralds India’s move towards a solar powered future, without compromising on efficiency or affordability.”

Commenting on the project, Ms. Kalyani Sekar, Vice President and Managing Director, Verizon Data Services India, said, “At Verizon, our commitment to empower communities around us is rooted in the firm belief that technology has the power to make lives better. Verizon India’s collaboration with IIT Madras to implement the Inverterless Solar System for ‘near off-grid’ areas in Telangana is a reaffirmation that we share our success with the community to make the world in which we work better than it was yesterday.”

Today, the Inverterless technology has multiple benefits to these hamlets
• Acting as an efficient power back up solution providing quality power
• Supplementing intermittent grid supply during peak summer and rainy seasons
• Reducing the burden on TSSPDCL while supplying power round-the-clock

Mr Dasru Nayak, Gram Sarpanch of Kesya Thanda, added, “Most of the people living in these hamlets come from tribal communities and are very poor. All that any of these household wanted was just to be able to run a fan, a tube light and charge mobile phones. This solar system gave us exactly that.”