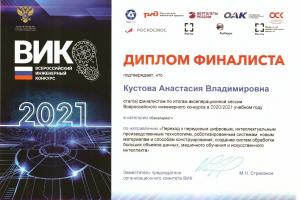 Anastasia Kustova, a student of PetrSU in the field of training “Construction”, reached the final of the All-Russian engineering competition.
B.N. Yagnyuk, Associate Professor of the Department of Technology and Organization of Construction, the head of the graduate qualification work of the student said:

When, in our third year, we decided to do the final qualifying work with Anastasia Kustova, a graduate of the Institute of Forestry, Mining and Construction Sciences, we did not hear anything about such a competition, a letter about its holding came from the Ministry of Education on October 8, 2020, when we had already decided on topic and began to work on the selection of literature on the topic of the project.

We chose a difficult topic, it demanded from Anastasia, a graduate of the department of technology and organization of construction, knowledge in the field of strength of materials, and structural mechanics, and metal structures, which we studied with her in the third year. The topic is: “Investigation of the bearing capacity of steel structures using naturally twisted rods.”

The fact is that the main characteristics of the stiffness of rod structures have different meanings in different directions: it is clear that a strip of steel is much easier to bend relative to its plane, but it is very difficult to bend to an edge. If such (and not only such) rod is pre-tightened about its axis, then stability along all axes is distributed evenly, which can be used in light steel structures.

With this work, Anastasia underwent a semi-final examination, which was marked by the first certificate, and became a finalist of the competition, for which she received a confirmation and a finalist certificate. We congratulate Nastya on this success, but the work on the FQP continues and the final results will be announced at the end of the finalists’ final works.

UGC asks all Universities and Colleges to observe August 14 as...