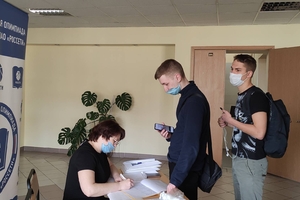 IV All-Russian Olympiad for schoolchildren of the “Rosseti” group

The regional stage of the IV All-Russian Olympiad for schoolchildren “Rosseti” took place on the basis of the Physico-Technical Institute.
On April 24 and 25, the IV All-Russian Olympiad for schoolchildren of the “Rosseti” group started, in which children of grades 9-10 who were interested in the exact sciences, energy and modern technologies took part. The competition was organized in two stages – at the regional and federal levels. The first qualifying stage in Karelia is organized and conducted by the Karelian branch of PJSC Rosseti North-West on the basis of the educational building of the Physico-Technical Institute of PetrSU.
At this stage, 37 participants completed tasks aimed at checking the level of knowledge within the framework of secondary general education programs in the subjects “Physics”, “Mathematics”, “Informatics”. Before the start of the competition, teachers of the Physico-Technical Institute E.V. Moshkina and A.V. Soloviev. They talked about the importance and relevance of the profession of an energy engineer, as well as what energy directions of training the Physicotechnical Institute offers its applicants .
On April 25, after the end of the competition round of the Olympiad, an introductory tour of the laboratories of the Physics and Technology Institute was held for the participants. O.V. Sidorov and A.A. Platonov demonstrated the operation of the equipment used by teachers and students in educational and research activities. The guys took part in the interactive part of the excursion with great enthusiasm and showed a keen interest in the upcoming Open Day.
The winners and prize-winners of the first stage will reach the final, where they will compete with their peers from other regions in solving complex tasks (cases) from the electric power industry, which will be prepared by specialized experts and specialists of Rosseti.

In the final of the All-Russian Engineering Competition!

Students were told about the development of pharmacy during the Renaissance

Texas A&M: Black Friday In An Age Of Uncertainty

TU Delft: TU Delft creates one of the world’s most precise microchip sensors – thanks…

iednewsdesk Nov 29, 2021
In an interview, Prof. Nolan first expresses his thanks and says that he is thrilled and honored to have been…

Texas A&M: Black Friday In An Age Of Uncertainty

TU Delft: TU Delft creates one of the world’s most precise microchip…