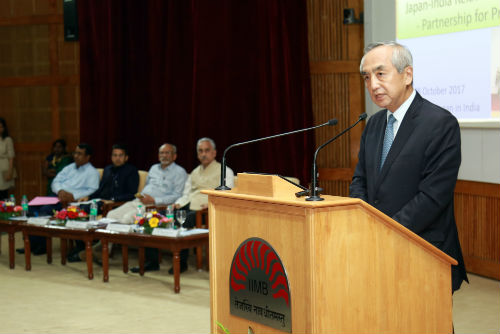 Bengaluru: “Japan would like to extend support to IIM Bangalore and the India-Japan Study Centre at IIMB for our association to attain greater success,” said Chief Guest H.E. Kenji Hiramatsu, Ambassador of Japan in India, during the Foundation Day Lecture at the 44th Foundation Day celebrations of Indian Institute of Management Bangalore (IIMB), on Saturday, October 28, 2017.
This year’s theme for the Foundation Day Lecture was ‘Japan-India Relations in a New Era: Partnership for Prosperity – Toward a Free, Open and Prosperous Indo-Pacific’.
In his address, Ambassador Hiramatsu discussed the current Japan-India relations with reference to the highlights of Prime Minister Abe’s visit to India last month and delved into how Japan and India could take the world’s most promising partnership yet, forward.

“Prime Minister Abe’s visit to India truly elevated Japan-India relations to an unprecedented height. The magnificent scene of a number of people on the streets of Ahmedabad orchestrating the enthusiastic welcome scene undoubtedly demonstrated the resounding success of the bilateral relations and reaffirmed the strength of the two Prime Ministers’ personal bonds. The most obvious outcome may have been the historic commencement of the High-Speed Railway project; however, the summit meeting expounded on the multifaceted collaborative endeavours that the two countries have embarked upon, be it maritime security and defence equipment cooperation, regional connectivity enhancement, further investment promotion, augmented people-to-people interaction programs, and so forth.”
He spoke at length about the opportunities of cooperation between India and Japan: for peace and prosperity of the Indo-Pacific Region and the world, enhancing cooperation on regional and global issues, enhancing defence and security cooperation, investment and development cooperation, and so on.

“I have special interest in enhanced cooperation for the start-up business between the two countries. There is a lot of synergy between the two countries and opportunities where we can collaborate with and support each other. The relationship will provide greater stability for the entire region, economic and otherwise. Let us work together for the Japan India bilateral relationship to flourish,” he said.
IIMB Director Prof. G. Raghuram, while introducing the Chief Guest, said that the presence of the Ambassador assumes significance since it was on September 14 this year that IIMB inaugurated the India-Japan Study Centre.

IIMB celebrated its 44th Foundation Day with a plethora of events and activities on campus. This year’s celebrations set off on a unique note with a panel discussion on ‘Building the IIMB Institution – A Director’s Perspective’, which was moderated by Prof. K. Kumar, Chairperson, Academic Programmes, NSRCEL. The panellists were former IIMB Directors K.R.S. Murthy – February 1991 to February 1997, M. Rammohan Rao – March 1997 to May 2002, P.G. Apte (Acting Director) June 2002 to October 2002 and October 2002 to October 2007, Sushil Vachani – July 2014 to April 2016 (who joined the panel via video conference), and IIM Bangalore Director Prof. G. Raghuram. It was a very interesting and informative discussion as the former IIMB directors shared their views on the various factors that contribute towards shaping the character, performance and destiny of an academic institution, the challenges they faced, their disappointments and triumphs. They spoke about the progress of IIMB through its achievements, challenges and defining moments. Prof. G. Raghuram said the discussion would be the basis of a document on institution building history. “History should point to lessons for the way forward.”

While Prof. Murthy emphasized the importance of handling and overcoming internal challenges, Prof. Rao said that it is a challenge to promote research with limited funds, Prof. Apte spoke about autonomy issues and balance between teaching and research, and Prof. Sushil Vachani said that being an ‘outsider’ to the IIM system never posed a challenge. Prof. Raghuram said his motivation to take charge as Director was his aspiration to be able to express himself on multiple dimensions beyond academics, and to reach out to as many stakeholders as possible. “But we must not rest on our laurels and need to do a lot more,” he added.
The panellists all agreed that other than resilience, the other key to success is to adapt to changing situations, internationalising (in terms of both students and faculty), and boosting interest in all areas of management. “The heart of the institution is the faculty and their energy needs to be harnessed to the fullest,” observed Prof. Kumar.

In his acceptance speech, DAA winner D Muralidhar said it was a momentous achievement for him to be recognized as a distinguished alumni by his alma mater IIMB. “In the journey of life, no other moment can bring so much of joy and a sense of satisfaction and validation. It is impossible to recollect and thank everyone who walked with me to reach this outlier status,” he added.
Sameer Suneja had a special word of thanks for IIM Bangalore, saying that the institute shaped him tremendously personally and gave him a brilliant launch pad professionally. He described the two years at IIMB as the best two years of his life in many ways. He went on to say that: “My teen daughter tells me that success boils down to three things – the place you are in, when you are in it, and the people you are with. She is absolutely right. No way would I have led the absolutely privileged life that I have, had it not been for my alma mater IIM Bangalore.”

Dr K P Krishnan too paid rich tributes to his professors and alma mater. “It is an honour to be the first Fellow from IIMB to be selected for the DAA. In these days of an emerging knowledge society, it is most appropriate to see recognition of the marriage of knowledge, public policy and management.” Stating that he felt humbled at the recognition, he said: “As someone who went back to graduate school at the age of 40, it is indeed a privilege to be nominated by a much younger peer group and recognised by the faculty for this award.”

IIMB Director Prof. G. Raghuram presented a report on the institute’s achievements during the year 2016-2017. Highlighting the school’s research endeavours, partnerships, faculty and student accomplishments, he said that the students, faculty and alumni continue to do IIMB proud. He also listed various recent and upcoming partnerships of IIMB with leading organizations in the world for attaining greater heights in the field of academics and research. “The India-Japan Study Centre, launched in September at IIMB, will promote understanding of Japan in India and India in Japan through research, teaching and policy outreach efforts. IIMB’s faculty have collaborated with Japanese institutions, conducted joint research and offered Executive Education Programmes. The India-Japan Study Centre will build on these initiatives and take the collaboration to the next level. IIMB has launched a MOOC on Sustainability in Japanese. The school already offers an elective course, ‘Business Planning for International Markets’, with specific focus on Japan, along with a Japan language elective course. The centre will facilitate collaborative initiatives among academia, industry and government agencies of both the countries to work on areas of mutual interest”. Talking about the BPIM, he said that Japan is the most favoured destination for students.

“Next week, we will be launching the Israel India Centre at IIMB with H.E. David inaugurating the centre. The launch will also mark 25 years of India-Israel partnership,” he added.
Prof. Raghuram also announced that IIMB is starting a doctoral programme on Entrepreneurship which will help in firmly establishing IIMB’s leadership position in the field of entrepreneurship, both qualitatively and quantitatively. “IIMB is the first IIM to launch such a programme”. He also spoke about IIMB’s new initiatives and IIMB’s second campus. He also spoke about Kris Gopalakrishnan, whose tenure as Member of the Board of IIMB came to an end yesterday (Oct 27). “He has been a friend philosopher and guide for IIMB and has taken keen interest in the activities of the institute, especially NSRCEL and was instrumental in the collaboration between IIMB and IISc for a science-based enterprise.

As part of the Foundation Day celebrations, a cultural programme and prize distribution for SRC events were conducted at the auditorium on October 27, which saw the IIMB community participate in full strength. Moreover, there was PGP 2001 and UBUNTU Scholarship Awards, prize distribution to faculty, officers, staff and their families for outstanding achievements in the fields of academics, sports and arts, and the Foundation Cup awards.

The Monk Who Became Chief Minister – Biography of Yogi Adityanath