The Monk Who Became Chief Minister – Biography of Yogi Adityanath

Yogi is on the path to become Next PM of India

Noida : The Monk who became the Chief Minister written by Shantanu Gupta was released and discussed today at theNoida International Literature Festival, Noida Golf Course Club. Author was in the city to be speaking at the NILFevent. Speaking at the occasion, Shantanu said, the state of Uttar Pradesh, with 22 crore people and 80 Lok Sabha seats, is one of the very crucial political pieces in India’s electoral puzzle. With a history of producing many Prime Ministers for the country, UP has given yet another prospect for the Prime Minister’soffice, in the post-Modi era in the form of Yogi Adityanath.

While answering – Who is Yogi Adityanath? author said – Yogi is a young 44 years old chief minister of the most populous state of India. At this young age, he already has two decades of grueling experience, as a parliamentarian. His performance credentials in the parliament on the account of questions, debates, and private members bills is among the best in the parliament. He has been part of various standing committees and parliamentary panels. His natural ability to connect with the people, through his Janta-darbarsat the mutt, is parallel to only a long time RSS pracharaks. Yogi and his Gorakhnath math is running more than 45 institutions in the eastern region of the country form many decades, where more than 50,000 students study, which makes him a strong administrator. Unfortunately because of their hate for saffron attire popular media and opposition, never focused on the merits of Yogi Adityanath.

Director of Indu Sarkar Madhur Bhandarkar said, making biopics in India is tough, as I faced number of challenges in getting Indu Sarkar to my viewers. The people who are talking about freedom of expression for Mersal, where were they when Indu Sarkar was in the same trouble. Why there is double standards on freedom og standard. 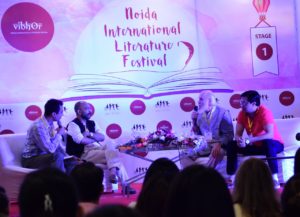 On Yogi-Modi comparison Shantanu said, both are Yogi’s and bachelor of sorts, extremely popular and hard working individuals. Modi came from the ladders of party cadre but Yogi never held a party position. Like Atal got a Advani and Modi got a Amit Shah on their path for the big seat, Yogi has to spot his companion in this journey.

Speaking on his experience of publishing the book, Shantanu said, getting a good publisher, is half problem solved. He thanked his publisher Bloomsbury for taking his book to his readers. Sharing tips around marketing the book, Shantanu said, for any publisher your book will be one among the many, that they have published that year. Author and his team should make all efforts to take the book to maximum number of sessions. Shantanu suggested all aspiring authors to visit all the literature festivals around the country to connect with fellow authors and publishers

Dr David Frawley , Padma Bhushan Awardee said, I loved to write the forward for this book and Yogi is the best thing happened to Uttar Pradesh. A Yogi can be politician for the benefit and service of the people. More and more right wing people should do rigorous research and write.

Its noteworthy that the Book, The Monk Who became Chief Minister, is published by London based, publisher Bloomsbury. The book is among the top recommend read by HT Brunch and Asian Age. The book is in the top 10 rankings among the biographies on Amazon and in top 3 in the WH Smith charts. Amazon listed this book among a few selected for ‘Memorable Books of 2017’ list. The author was invited by the prestigious Pune International Literature Festival (PILF) two weeks back. Book has already got selected from the Literature festivals and fests at Noida, Lucknow, Odisha, Jaipur, Dehradun and Mumbai.

Mainstreaming Peace Education to develop a Culture of Peace

Power Resides with Citizens in a True Democracy: Vice President of India Jagdeep…