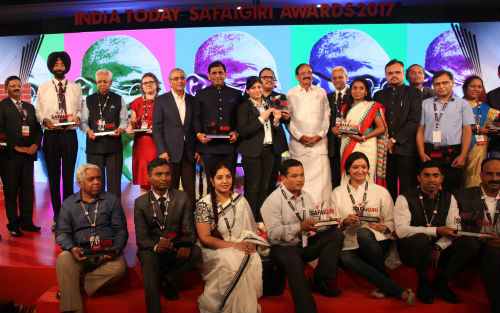 New Delhi: The third edition of India Today Safaigiri Awards felicitated 16 cleanliness champions at a glittering event that saw Vice President M Venkaiah Naidu in attendance.
The Safaigiri awards were launched in 2015 after Prime Minister Narendra Modi nominated the India Today Group and its Chairman and Editor-in-Chief Aroon Purie as ambassadors of Swachh Bharat Abhiyan. This year, the India Today Group also recogised women safai warriors who have brought about change in their village and district. Actor Bhumi Pednekar gave away special awards to these Swachhta hi Seva champions.

Staying true to his knack for witticisms, Vice President M Venkaiah Naidu said “felicitation is to give inspiration to others” at the third edition of India Today Safaigiri Awards.
Venkaiah Naidu, who was in attendance at the Safaigiri Awards last year as a Union minister, said that earlier it was his duty to attend such events but now it is a matter of pleasure. “I have retired from politics but not tired from public life,” Naidu said as the audience smiled.Commending India Today for honouring citizens who are doing pioneering work in the field of cleanliness and sanitation, Venkaiah Naidu said “media hold enormous potential for influencing public opinion and awards like these will give a big boost to citizens and corporates to donate time and efforts to the cause of Swachhata”.

Challenges in India are far more complex; India is culturally diverse, it is more densely populated, there is scarcity of water, and there is stigma associated with emptying pits which even Mahatma Gandhi could not help us erase, said India Today Group Chairman and Editor-in-Chief Aroon Purie at Safaigiri Awards 2017.

SEHAT cards to be issued on Mission Mode: DDC Shopian

Serious efforts will be made in the state for women empowerment: CM…

Cent percent financial provisions will be made for development and…