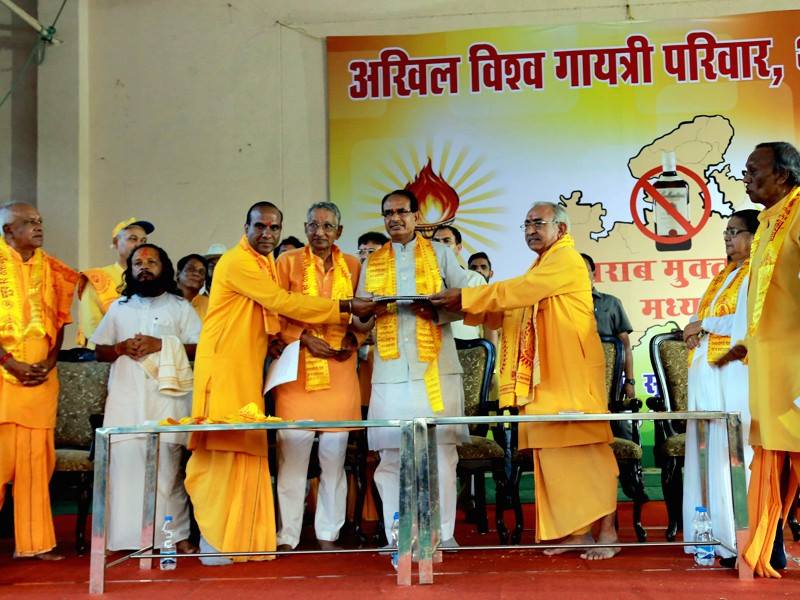 Bhopal : Chief Minister Shri Shivraj Singh Chouhan said that Mahatma Gandhi became great by his deeds. Bapu transformed his life practicing truth and non-violence all his life time. Shri Chouhan mentioned that programmes to make life meaningful will be organized on the occasion of 150th anniversary of Mahatma Gandhi. A state level committee will be constituted related to the arrangements of the programmes. Shri Chouhan was addressing the Sarva Dharma Prarthana Sabha held at Gandhi Bhavan on the occasion of International Non-Violence Day here today.

Shri Chouhan stated that Indian Philosophy is the Philosophy of Mahatma Gandhi. Principles of truth and non-violence of Indian culture were transformed into ground realities by the Bapu. He showed the practical form of non-violence. He was such a revolutionist who always following the path of truth and satyagrah and has compelled the Britishers to quit India. Bapu has said that violence is not a solution for any problem. Shri Chouhan mentioned that lives of victors of major wars ended in frustration. Today rule of violence and terrorism is being witnessed in the world. Solution is there in the thoughts of Bapu. Shri Chouhan said that great personalities are respected by all, we should also follow their teachings. Referring to the incidents of Bapu’s life, Shri Chouhan mentioned that Bapu used to teach people from his conduct. He urged for making effort to imbibe the teachings of Bapu in conduct. Small efforts bring big changes in life. Life can be made meaningful only analysing improper activities daily.

Atlassian launches new products and updates across its…

Moreover, Shri Chouhan said that Mahatma Gandhi was determined about cleanliness. Perspective can be changed by request. Bapu used to clean toilet when there was a tradition of manual scavenging. It was a matter of dispute between him and his wife. Mahatma Gandhi is the inspiration of Swacchta Abhiyan of the Prime Minister Shri Narendra Modi. Swacchta Abhiyan has started reflecting now. Change has come in the approach of the society towards cleanliness. People who used to spread dirtiness are hesitant now. Shri Chouhan told the people to quit addiction during de-addiction week. People should encourage others to quit addiction.

University of Bristol: New rankings confirm subjects taught at the…