Delivering the inaugural address at the 9th Nuclear Energy Conclave yesterday at national capital, Dr Jitendra Singh said, after 60 years, we are now in a position to claim to the whole world, how India’s Nuclear Programme has emerged as a major resource pool for the growing energy needs of the country for its economic growth and development. He said, even though at present almost 60% of power generation in India is from coal and other sources, but in the years to come, green sources of energy, including the nuclear energy will be playing a major contribution.

Congratulating the organizers of the conference for having included in their programme this year focused sessions on application of nuclear energy for medical irradiation in patients and other such situations, Dr Jitendra Singh said, the enormous non-electricity applications of nuclear energy are either not known or they are now put into use. In this context, he cited his personal experience of having promoted the application of nuclear energy in the last one year or so in diverse fields including irradiation of agricultural and food products and non-destructive cleaning of the monumental structures.

Describing Prime Minister Shri Narendra Modi as a man with a natural temper for science, Dr Jitendra Singh said, it was a huge advantage in the last three years to have someone like him at the helm, because this enabled us to give a special impetus to expansion of our Nuclear Energy Programme in the country. For example, he said, it is during his regime that an out-of-box decision was taken to enter into joint ventures with other PSUs for setting up new nuclear installations, which would help the Department of Atomic Energy to overcome the constraints of finances. It was also during these three years that the Atomic Energy programme which was confined mostly to southern States of India was brought to the northern States as well and in this endeavor, an atomic plant is already in the process of being set up in Gorakhpur, Haryana near Delhi, he added.

Not only this, Dr Jitendra Singh said, India is today a frontline nation of the world in its nuclear energy capability which is going to multiply three-times in the years to come. This, he said, is also the most befitting example of Prime Minister Shri Narendra Modi’s “Make in India” mission. 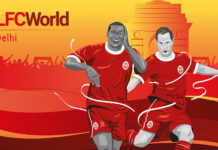 Heartfulness Institute to set up ‘PV Sindhu Badminton Academy and Stadium’ a state of...

State News February 19, 2020
0
Chennai: With the laying of the foundation stone by Ace Badminton player Ms. P.V Sindhu, Heartfulness Institute unveiled its plans of setting up a...

Institutional Level Collaborations are the Future aver Experts at the 20th...