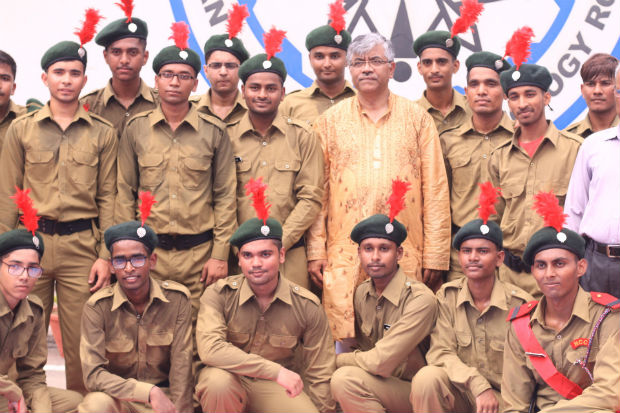 Ropar: Indian Institute of Technology Ropar celebrated the 71st Independence Day through a ‘Freedom Run’ through which the Institute honoured the nation and its freedom fighters. The ‘Freedom Run’was kicked off by the Director Prof. Sarit Kumar Das, and was organised by the sports officer along with the sports secretary, coaches and volunteers.

The celebration began with the customary flag hoisting by the Director, which was followed by the entire faculty, staff, students, and their family members fervently singing the national anthem. Speaking on the occasion Prof Harpreet Singh, Assistant Professor, Mechanical Engineering Department,said “Independence was an outcome of synergistic efforts of all the Indians irrespective of their caste and creed. Our elders joined hands respecting each other’s sentiments & beliefs to fight against the tyranny. Then why can’t we also join hands once again to fight against poverty, intolerance, illiteracy and corruption. Let us make our country a place where freedom is exercised with responsibility so that everyone could enjoy the fruits of freedom without fear or impartiality”.

The function also included a cultural programme that constituted song and dance performances by students which were a reflection of the deep sense of patriotism ingrained in our youth. The event concluded with a prize distribution ceremony felicitating the winners of the ‘Freedom Run’.

Sharing his thoughts on our journey as an independent nation, Prof S.K Das, Director IIT Ropar in his opening remarks said, “India is the only country which respected Independence for itself and also for others. History shows, we have left deep influence in South-East Asia without colonizing them because we respected our philosophy and their independence both. Even when it came to snatching our independence, we did it in unique way, without taking to arms. This gives us a unique moral right to argue for a more just and more equitable world; free of hunger and suppression of opinion. Let us celebrate 70 years of this unique philosophy of a unique country called India.”