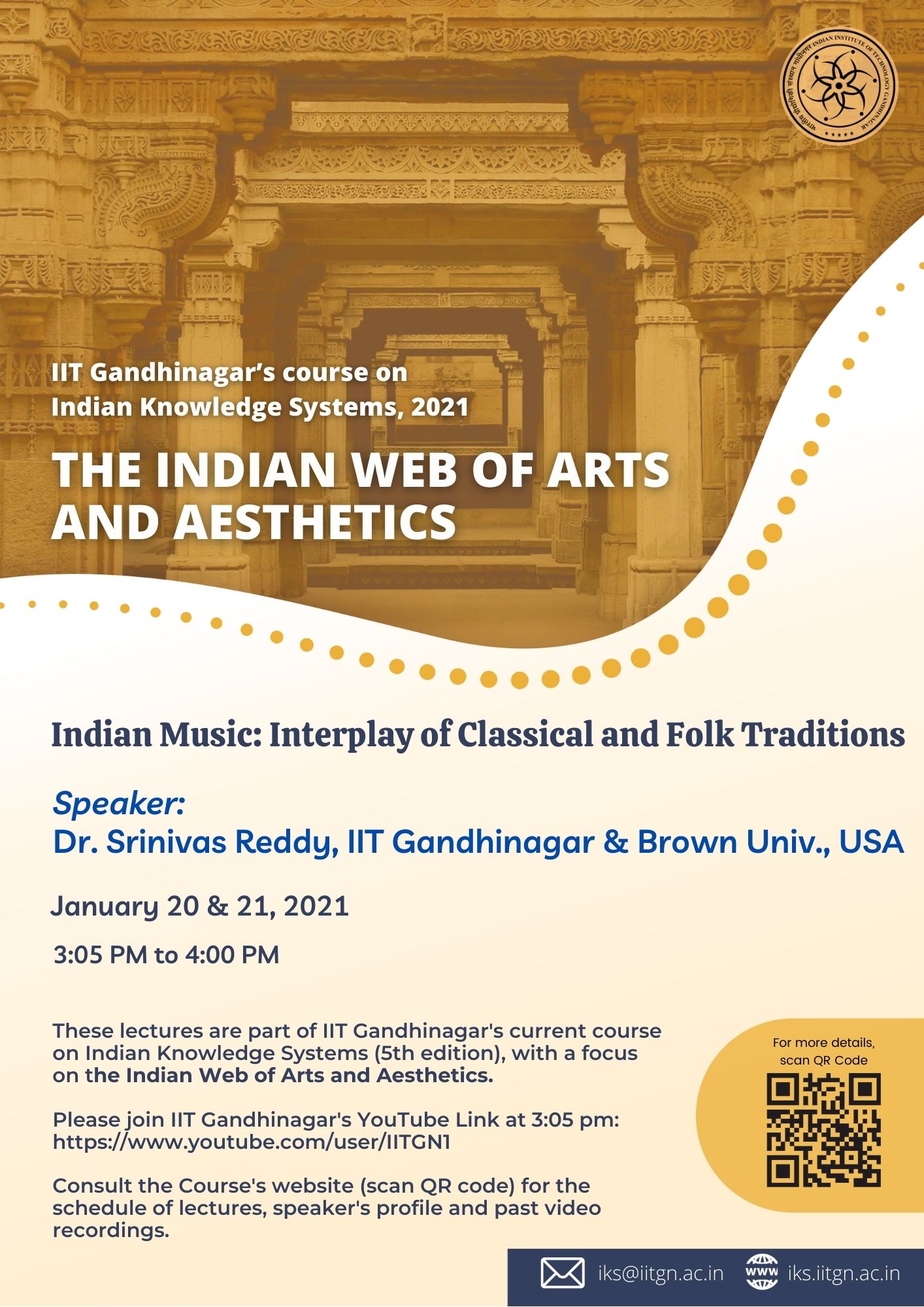 Gandhinagar: As a part of the lectures series under the Indian Knowledge Systems (IKS) elective course, the Indian Institute of Technology Gandhinagar (IITGN) is going to hold two online talks on ‘Indian Music: Interplay of Classical and Folk Traditions’. The distinguished scholar, translator and musician Dr Srinivas Reddy will deliver these lectures on January 20 & 21, 2021, from 3:05 to 4 pm (IST).

Dr Srinivas Reddy studied classical South Asian languages and literature and currently teaches at Brown University, USA, and IIT Gandhinagar. He is also a concert sitarist and studied in the traditional guru-śiṣya paramparā with Pandit Partha Chatterjee, a senior disciple of the late sitar maestro Pandit Nikhil Banerjee of the Maihar Gharana. Dr Srinivas has also authored some notable books, including Raya: Krishnadevaraya of Vijayanagara (2020), Meghadutam: The Cloud Message (2017), Malavikagnimitram: The Dancer and the King (2015), and Amuktamalyada: Giver of the Worn Garland (2010).

In his talks, Dr Srinivas will elaborate on the theoretical ideas and historical development of various musical traditions and practices from across the country. The first part of his presentation on Indian music will explore the theoretical formulation and historical evolution of the mārga-deśi concept as expressed in the saṅgīta-śāstra literature, including seminal texts such as Bharata’s Nāṭyaśāstra, Mātaṅga’s Bṛhaddeśi, Śārṅgadeva’s Saṅgītaratnākara, and Rāmāmātya’s Svaramelakalānidhi. He will also highlight the evolution of theoretical ideas over time. The second part would explore specific musical examples from living and past masters from the classical and folk music traditions, including artists such as Pandit Nikhil Banerjee, Prahlad Singh Tipaniya, M S Subbulakshmi, and Ustad Nusrat Fateh Ali Khan. The lecture will also look into diverse musical practices from across the country.

This is the fifth edition of the Introduction to Indian Knowledge Systems (IKS) elective course, which is being held online on the theme ‘The Indian Web of Arts and Aesthetics’. The course is open to students and anyone interested in India’s knowledge systems and cultural heritage. They can join the course for free by registering online at: http://iks.iitgn.ac.in/. All lectures will be livestreamed on IITGN’s YouTube channel.

Neuberg Diagnostics gets ICMR approval to carry out COVID-19 tests in Noida, Salem, Vizag, and Kozhikode