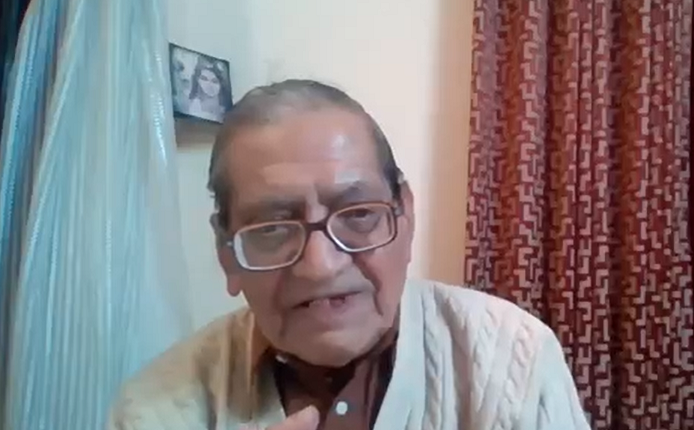 Gandhinagar: As a part of the sixth edition of the Indian Knowledge Systems (IKS) elective course by the Indian Institute of Technology Gandhinagar (IITGN), distinguished author and scholar of Indian intellectual traditions, Prof Kapil Kapoor, delivered three online talks in conversation with Prof Michel Danino, Visiting Professor, IITGN. Among the three lectures, ‘The Landscape of Indian Literatures – Parts I and II’ were delivered on January 27 and 28, and the third lecture titled – ‘Shah Hussain: 16th-century Punjabi Sufi Poet.’ – was held on February 1, 2022.

During the first two lectures, Prof Kapil Kapoor provided a glimpse of India’s rich and diverse ‘literaturescape’, explaining how this landscape is mostly a product of the essentially oral Indian culture, with its long history and an immense variety of forms. There are widespread compositions of verse narratives in many Indian languages. These aural-visual compositions (like in the Ramayana and Mahabharata) are metrical and meant to be enounced, sung, performed, heard, and seen. The Rigveda was the first, and Guru Granth Sahib (16th century) is the latest intellectual text (Grantha) of the Sanatana Dharma. During the conversation, Prof Kapoor mentioned, “The nature of the Indian intellectual environment and culture involves the communication of thought through stories, songs, dramas, which function as drishtant (examples) to illustrate innumerable ideas.”

Prof Kapoor elaborated that the dominant form of Indian literature, katha (narrative literature), deals with the nature of human life and human goodness. Indian literatures are not individualistic; they are participative in nature and operate in the life of Indians in many ways. Each Indian language is a garland of sounds, having a common source of phonetics. Indian languages share their vocabulary and structure of sentences (subject-object-verb), but in a flexible way. These features indicate a common Indianness about these languages and literatures in terms of their themes, values, and forms.

He also explained to participants that one of the major movements of all Indian literatures was the Bhakti movement, themed on love and devotion. Some of the poets from this movement included Andal (Tamil Nadu), Basavanna (Karnataka), Dnyaneshwar (Maharashtra), Narsi Mehta (Gujarat), Mirabai (Rajasthan), Guru Nanak (Punjab), Ramananda (Uttar Pradesh), Sarala Das (Orissa), Jaideva (Bengal), and Sankaradeva (Assam). Although the Bhakti movement began in the 4th-5th century, it is still alive today, e.g. in Haryana and Rajasthan. According to Prof Kapoor, “This movement was instrumental in democratising knowledge by translating classical thought into various Indian languages (the process of vernacularisation).”

The third talk by Prof Kapoor threw light on the life and works of a Punjabi Sufi poet of the Bhakti movement, Shah Hussain. Talking about the Punjabi Sufi poet, he said, “Hussain was a voice of girls and women. He created new values in society and challenged the older ones through his poetry.” The son of a weaver, Shah Hussain was born in Lahore and is considered a pioneer of the kafi form of Punjabi poetry. Many of his kafis have been set to music and form an integral part of Punjabi folk culture. His poetry is mystic, distinguished by the excellence of lexical choice and depth of feeling. Even when he talks of his beloved, his utterances border on divinity. Prof Kapoor read out and explained several parts of Hussain’s poetry. All three online talks concluded with lively Q&A sessions.

Prof Kapil Kapoor, who has been teaching for over sixty years, has been one of the pioneering academicians and experts on Indian Knowledge Systems in India. Generations of students have been fascinated by his lucid, invigorating and ever original elucidations, as a speaker and a writer alike, of the most complex concepts of Indian literature, philosophy, aesthetics, languages and textual studies, to which he has dedicated several books and numerous papers. Prof Kapoor taught at Jawaharlal Nehru University, New Delhi, for decades, as a Professor of English (in the Centre for Linguistics and English) and as a Concurrent Professor at JNU’s School of Sanskrit and Indic Studies. He was a member of numerous bodies like the Indian Council of Philosophical Research, the Central University of Higher Tibetan Studies (Sarnath), and the Sanchi University of Buddhist and Indic Studies (Madhya Pradesh). He was also Chairman of the Indian Institute of Advanced Study (Shimla).

The sixth edition of Introduction to Indian Knowledge Systems elective course, IKS 2022, is being held online on the theme ‘Precolonial India’s Treasure House of Literatures’. The course is open to students and anyone interested in India’s knowledge systems and cultural heritage. They can join the course for free by registering online at: http://iks.iitgn.ac.in/. All lectures will be live-streamed on IITGN’s YouTube channel, generally on Thursdays and Fridays from 5:05 to 6 pm. The course’s website will carry regular announcements and updates on the speakers and lectures.