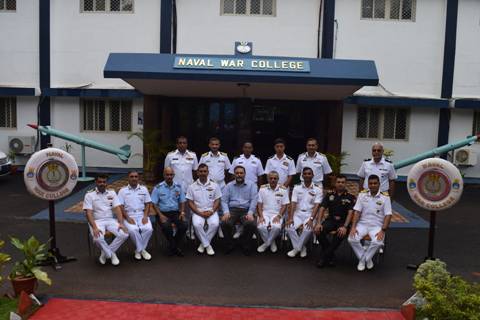 New Delhi: The second international programme for naval officers from friendly foreign countries launched by the Indian Navy’s War College at Goa, was inaugurated this morning by Prof Varun Sahni, Vice Chancellor, Goa University. Stressing the importance of maritime security in nation-building during his inaugural address, the professor remarked that in a dynamically changing geo-political scenario, there is a need for navies in the Indian Ocean Region to forge stronger ties and collaborate in developing an efficient security architecture in the maritime domain.

Aimed at strengthening bridges of friendship, and building consensus amongst regional maritime nations, the course curriculum covers a wide canvas. During the Course, participants are exposed to International Relations Theory, Geopolitics, concepts of maritime security and Strategy, International Maritime Law and management of ocean resources amongst others.

During the eight week programme, the participants are exposed to subject matter experts and eminent speakers and familiarisation visits to Operational and Training Commands of the Indian Navy. In addition, the participants are put through simulation exercises on regional security scenarios including Humanitarian Assistance and Disaster Relief (HADR).

iednewsdesk May 12, 2021
New research has revealed multiple weaknesses in the security of Wi-Fi connections. Attackers could take…