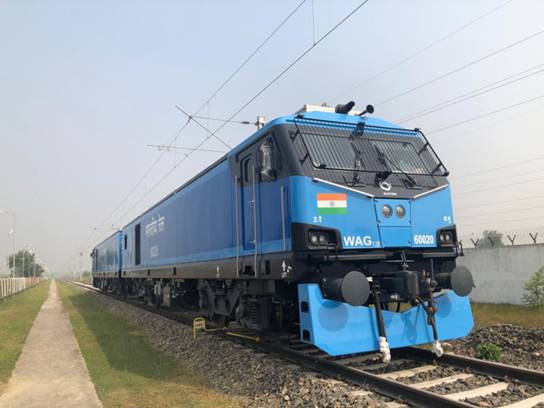 The loco is named WAG12 with Number 60027. The train departed from DeenDayalUpadhyaya Station at 14:08 hrs in long haul formation for Dhanbad Division of East Central Railway, consisting of 118 wagons which travelled from Pt DeenDayalUpadhyayaJn to Barwadih via Dehri-on-Sone, Garhwa Road.

It was a proud moment for Indian Railways, as it became 6th country in the world to join the elite club of producing high horse power locomotive indegenously. It is the first time, high horse power locomotive has been operationalised on broad gauge track in the world. The locomotive has been produced under Make in India programme. The Madhepura factory is the largest integrated Green Field facility built to the highest standards of quality and safety with production capacity of 120 locomotives and spread across a massive 250 acres.

These locomotives are state of art IGBT based, 3 phase drive, 9000 KW (12000 horse power) electric locomotive. The locomotive is capable of maximum tractive effort of 706 kN, which is capable of starting and running a 6000 T train in the gradient of 1 in 150. The locomotive with twin Bo-Bo design having 22.5 T (Tonnes) axle load is upgradable to 25 Tonnes with design speed of 120 kmph. This locomotive will be a game changer for further movement of coal trains for Dedicated Freight Corridor. The locomotives can be tracked through GPS for its strategic use through embedded software and Antennae being lifted through the servers on ground through microwave link.

The locomotive is capable of working on railway tracks with conventional OHE lines as well as on Dedicated Freight corridors with high rise OHE lines. The locomotive has air-conditioned driver cabs on either side. The locomotive is equipped with regenerative braking system which provides substantial energy savings during operations. These high horse power locomotives will help to decongest the saturated tracks by improving average speed of freight trains.

Madhepura Electric Locomotive Pvt. Ltd. (MELPL) will manufacture 800 State of the Art 12000 HP Electric Freight Locomotives in 11 years and being one of the most power full electric locomotive in the world will increase the speed of freight trains and will allow faster, safer and heavier freight trains to move across the country, thus reducing congestion in traffic. It will also lead to considerable savings in energy consumption through re-generative braking. As part of the project, factory along with township has been set up in Madhepura, Bihar with capacity to manufacture 120 locomotives per year. The project will create more than 10,000 direct and indirect jobs in the country. More than Rs 2000 Crores has already been invested in the project by the company.

Along with the factory, socio-economic development in Madhepura is being driven by this project. As part of CSR initiative skill centres are being set up in Madhepura to impart training to local people.

The project started in 2018 and the Prime Minister of India inaugurated the project on 10th April’ 2018. The prototype locomotive was delivered in March 2018. Based on the test results having design issues, the complete locomotive including bogies has been redesigned. The new design of locomotive has been inspected by RDSO at Madhepura factory and cleared for dispatch from factory on 16th Nov’ 2019. Further RDSO has conducted oscillation trials at various speeds upto 132 kmph and the locomotive has passed oscillation trials successfully. The locomotive has made its maiden commercial run between DeenDayalUpadhaya Station to Shivpur on 18.05.2020. The design was completed for the whole locomotive in a record time of four to six months and despite the initial hiccups and the onset of the COVID-19 pandemic, it could not dampen the spirit of August initiative of IR, surpassing all odds we could secure the permission of the Bihar Govt. to resume operations at the Madhepura Factory putting the project back on track.