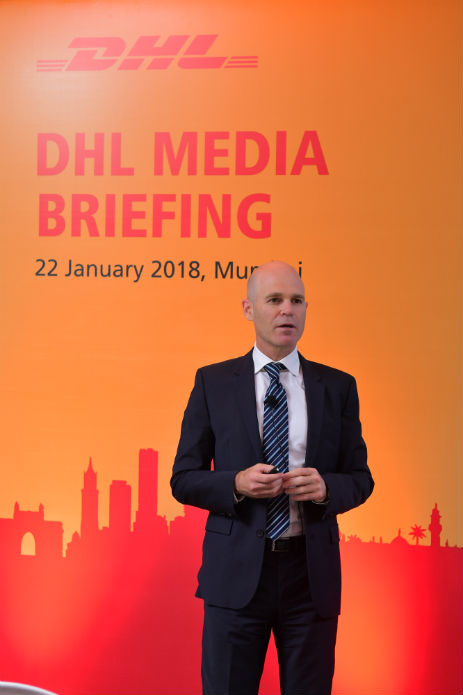 The first ever DHL Global Trade Barometer, an early indicator of global trade developments calculated using Artificial Intelligence, Big Data and predictive analytics, assigned India the highest growth indices of the seven countries assessed, due to strong and sustained increases in both air and ocean freight in and out of the country. The country’s trade in machinery and high-tech goods continues to underpin its growth, while increased imports of industrial raw materials point to an extended period of trade development for the nation.

“More than any of the world’s largest economies, India’s major industries have displayed levels of resilience and growth that will buoy business confidence in the short to medium turn,” said George Lawson, Managing Director, DHL Global Forwarding India. “India’s economy has built up terrific momentum in recent times: since 2008, its GDP has risen every single year to US$2.44 trillion last year, more than double the levels of a decade ago.[1] As the country continues to invest heavily in infrastructure,[2] we expect it to continue its upward trajectory for the foreseeable future.”

According to the DHL Global Trade Barometer, businesses in India can expect ocean trade to further improve on already-high levels, largely thanks to demand for commodities and industrial materials from overseas. Air freight demand is projected to remain stable at its current highs, sustained by growth in machinery and technology imports. Both India’s air and ocean freight forecasts proved stronger than those of any other country in the Global Trade Barometer – in large part due to every major sector making a positive contribution to the country’s trade.

“We’re expecting strong performance in not just one or two sectors, but across the entire Indian economy,” said George Lawson. “That implies two things: Indian enterprises of all stripes are not only growing fast, but becoming more and more globally connected in how they do business.” He added that dynamic planning will become even more important. “Given this steep growth, it is critical that Indian exporters and importers alike partner with professional logistics providers to ensure their air and ocean demand is met with the right supply of capacity.”

Developed jointly by DHL and Accenture, the DHL Global Trade Barometer provides a quarterly outlook on future trade, taking into consideration the import and export data of seven large economies: China, South Korea, Germany, India, Japan, the United Kingdom, and the United States. Together, these countries account for 75 percent of world trade, making their aggregated data an effective bellwether for near-term predictions on global trade. The DHL Global Trade Barometer, which assesses commodities that serve as the basis for further industrial production, predicts that global trade will continue to grow in the next three months, despite slight losses in momentum.