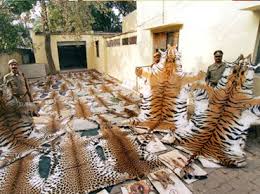 New Delhi: On Global Tiger Day , WWF is urging tiger-range governments to strengthen anti-poaching efforts and crack down on a severe wildlife snaring crisis that is threatening wildlife across Asia, especially the world’s remaining wild tigers, which number only around 3,900.

Easy to make from widely available material such as bicycle cable wires and quick to set up, wire snares are deadly traps that are fast becoming the plague of Asia’s forests. Driven by the growing illegal wildlife trade, which is now reaching an estimated US$20 billion annually Illegal wildlife trade is estimated to reach USD20 billion per year, which makes wildlife trafficking the world’s 4th largest illicit trade, after narcotics, human trafficking and trade in counterfeit goods.

“Snares are dangerous, insidious and quickly becoming a major contributor to the wave of extinction that is spreading throughout Southeast Asia – and tigers are being swept up in this crisis. All efforts to recover wild tigers are now imperiled by snaring on a massive scale. We cannot over emphasize the need for strong government commitment and investment in rangers who are on the frontline of conservation, clearing snares and apprehending those who set them,” said Mike Baltzer, Leader of WWF Tigers Alive.

In the rare occasion that a wild tiger is able to escape a snare, it suffers debilitating injuries that prevent it from hunting, eventually causing it to die of starvation or infection. In addition, snares maim or kill any animal that activates them thus dealing a double blow to wild tigers, by trapping the prey base they need to survive and reproduce.

“It’s impossible to know how many snares are being set up every day, and threatening wildlife in these critical habitats. Hundreds of thousands of deadly snares are removed by rangers from Asia’s protected areas annually, but this is just the tip of the iceberg,” said Rohit Singh, wildlife law enforcement expert at WWF.

Within the Tropical Rainforest Heritage of Sumatra, a UNESCO World Heritage site and the only place on Earth where wild tigers, orangutans, elephants and rhinos are found in the same habitat, snare traps are estimated to have doubled between 2006 and 2014 The number of snare traps in Sumatra recorded in 2013 and 2014 are doubled, when compared to the preceding eight years, suggesting a higher number of poachers in the area.

Yet, many of such critical habitats lack adequate resources for protection. In nearby Rimbang Baling, one of several protected areas in Sumatra, only 26 rangers patrol over 1,400 square kilometres, an area equivalent to nearly twice the size of New York City.

In India, reported tiger deaths related to poaching reached an all time high in 2016. These reported figures might represent only a fraction of actual mortality. Electrocution and poisoning of the big cats have also been recorded across tiger habitats. With wildlife traps and electric wires embedded deep into the ground or hid among debris, the detection of these devices are often difficult and missed by forest guards who manually patrol our forests to ensure protection of our wildlife.

TRAFFIC India introduced Deep Search Metal Detectors (DSMD) in 2008 which have been distributed to Tiger Reserves across the country. The DSMDs help in detecting traps/snares, wires and other metal devices even buried up-to 7 feet below the ground or debris.

Local communities also play an integral role in the protection of biodiversity and ecosystems. In India approximately 45 mn people live in forest-fringe areas and more than 300mn people are dependent on forests for subsistence and cash livelihoods. Engagement of local communities is thus a key constituent in conservation efforts and can lead the way in helping reduce poaching and managing human-tiger interactions in the country.

Speaking about the importance of community involvement to reduce poaching, Mr. Ravi Singh, Secretary General and CEO, WWF-India said, “WWF-India has been working with communities on holistic approaches to conservation. Making them primary stakeholders in the protection of forests and its wildlife can go a long way in enhancing anti-poaching efforts of the country.”

In 2010, tiger range governments committed to the most ambitious conservation goal set for a single species – TX2, or the global goal to double wild tigers by 2022. Since 2016, the long trend of decline in global wild tiger numbers has halted for now and may even begin to rise, signaling a beacon of hope for global tiger conservation. Conservation organizations across the continent are calling for urgent action to build awareness and strengthen anti-poaching measures and reinforce investments in rangers, without which the poaching crisis will turn the trend back towards decline.