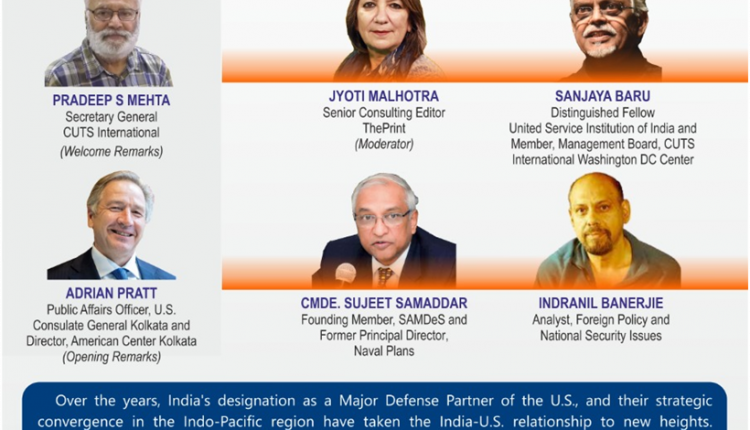 Indo-U.S. defense relations should be a major pillar for the success of the Indo-Pacific construct: Experts

New Delhi: “The India-U.S. relationship can be a pillar of stability in an increasingly unsteady and uncertain world,” said Pradeep S Mehta, Secretary General, CUTS International. He was delivering Welcome Remarks at a workshop organised by CUTS International under the Defense News Conclave Project, being implemented with the support of the U.S. State Department (U.S. Consulate Kolkata) and knowledge support from the U.S.-India Business Council (USIBC).

This workshop series aims at creating awareness about the importance of India-U.S. defense relations, particularly in the context of contemporary developments in the Indo-Pacific region.

Sanjaya Baru, Distinguished Fellow, United Service Institution of India and Member, Management Board, CUTS International Washington DC Center, traced the historical arc of India-U.S. defense relations. He observed that the strategic relationship with the U.S. has always been intertwined with transactional and commercial aspects involving arms transfers and the sale of defense equipment. He cited the circumstances surrounding the 123 Agreementand India-U.S. cooperation on civilian nuclear energy in this context.

Indranil Banerjie, Analyst, Foreign Policy and National Security Issues, emphasised on the need for the Quad to deliver practical outcomes. In this context, the panellists discussed how the recently unveiled Indo-Pacific Maritime Domain Awareness initiative by the Quad is a step in the right direction.

Announcing admissions for BTech in collaboration with…

Workshop organized on Data and visualization in Journalism…

Know How World Class Facilities at the University of British…

The experts also cautioned that unless there is a greater degree of technology transfer between the two countries, the full potential of the partnership in areas like joint research and development cannot be tapped.

This also needs to be accompanied by hardware exchanges between the armed forces of the two sides in order to facilitate greater levels of inter-operability.

With India’s approach to defense preparedness increasingly focusing on greater self-reliance and indigenisation along with technology transfers, the panellists discussed strategies and areas where greater American investments can be sought in ramping up India’s domestic defense manufacturing capacity.

This becomes important since the U.S. increasingly sees India playing the role of a net security provider in the Indo-Pacific region, as was mentioned by Adrian Pratt, Public Affairs Officer, U.S. Consulate General Kolkata, in his remarks.

The panel acknowledged that the entry of Chinese forces into the Indian Ocean region had altered the strategic calculus. The capacity gaps between the navies in the Indo-Pacific and the People’s Liberation Army Navy (PLAN) are significant, and concerted efforts towards greater naval cooperation will be required to maintain a deterring maritime presence in the region.

The discussion also touched upon other relevant thematic areas – including the need for greater cooperation between India and the U.S. on aircraft carriers, nuclear-powered submarines and in the space domain, as well as the threat posed by climate change in the Indo-Pacific region, among others.

The virtual session saw enthusiastic participation, with over fifty participants joining to hear experts deliberate on these issues.This was the first of a series of such workshops, which have been conceptualised as capacity-building sessions for media professionals, so that they can have a more informed view of defense and strategic matters.

With its headquarters in Jaipur, India, CUTS International has regional centres in Accra, Lusaka and Nairobi covering West, Southern and East Africa. Besides them, it has centres in Hanoi, Geneva and Washington DC. In India, it has a regional centre in Kolkata, a rural development centre in Chittorgarh and a liaison office in New Delhi.

Workshop organized on Data and visualization in Journalism & Research in IIMC, Jammu Campus

Announcing admissions for BTech in collaboration with Virginia Tech, USA hosted by…

Workshop organized on Data and visualization in Journalism & Research in IIMC,…

India Education Diary Bureau Admin May 30, 2022
A group of Australian scientists have for the first time unravelled the history of climate change upheaval on the…