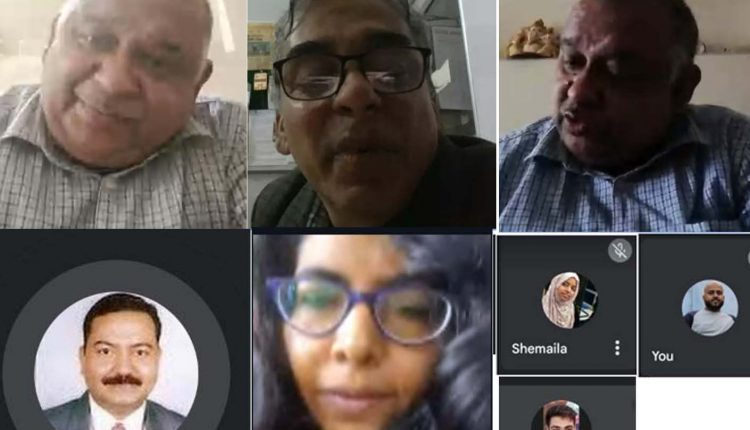 Interactive session held on the importance of Hindi

ALIGARH: “Although Article 343 of Indian Constitution provides that the official language of the Indian Union shall be Hindi in Devnagri script, the government of India is keen on promoting the other 21 Indian languages”, said Mr Diwakar Vikram Singh, Deputy Director, Official Languages, Department of Atomic Energy, Mumbai, while addressing an online Interactive session on “The importance of Hindi and other Indian languages in the context of National Education Policy (NEP), 2020” of the Department of English, Aligarh Muslim University (AMU).

Emphasizing the importance of the Hindi language, Singh said, “Hindi is not only spoken in India but also in numerable other countries like Trinidad and Tobago, Surinam, Pakistan, Bangladesh, United Kingdom, Germany, United Arab Emirates and Singapore”.

“A number of Hindi Departments are being established in the Southern states of India to minimise the existing gap between Hindi-speaking and non-Hindi speaking states,” he added.

An interactive discussion was also held on the political and cultural aspects of different regional languages and the challenges in the implementation of NEP 2020.

Expressing concern over possible negligence of English language in school teaching under the NEP, Prof Aysha and Prof Anup Saikia said if we do not teach English to school children, they may not have better opportunities in their career. They asked, “Won’t it further create disparity among people in terms of employability and employment opportunities?”

While Zainab Mustafa and Kapil Chauhan criticized the proposals related to English teaching, Prof Raashid Nehal, Moderator of the interactive session, raised the issue of teacher training in local languages pointing out difficulties in teaching. He said it is not wise to avoid English language teaching as it offers a vast spectrum of economic opportunities.

Responding to their concern, Mr Diwakar Vikram Singh hoped things will change for good, though they may change slowly and gradually since the implementation of the policies will take time.

Dr Ubaid Farooqui, Ms Farhat Bahar and Mr Sahil Khan were among the other attendees.