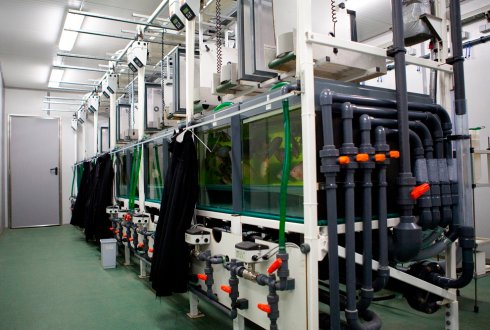 Scientists across the globe conduct studies using Wageningen University & Research’s (WUR) respiration cells for fish. These twelve tanks allow for precise measurement of, among other things, oxygen intake and excretions by fish. This facility is so unique it has been included in Aquaexcel 3.0, a European programme to foster research on, and collaboration within, aquaculture. The programme is to be launched this week.

Twelve large tanks are set up next to each other in a large hall. Some contain fish such as sea bass, turbot, tilapia, catfish, eel and rainbow trout. The biological filters allow the water to be almost entirely reused, which makes the system extremely sustainable. And unique. ‘To the best of my knowledge, this is the only respiration system for marine research in which so many different things can be measured,’ researcher Roel Maas states proudly.

Most scientists use the cells to learn more about fish metabolism. Maas: ‘We know precisely what and how much the fish eat, how much is digested and excreted. And thus, what the fish stores and how much oxygen this requires’. Simply put: the better and more efficient the fish can store, for example, proteins, the more fish filet this eventually yields and the more sustainable its production.

In addition to oxygen intake and excretions, the researchers can also measure how much CO2 and ammonia fish emit. Like cows, fish emit hazardous substances. Not a problem in nature, but an issue in closed aquaculture systems.

The European Union considers it essential that researchers have access to Wageningen’s respiration cells. Thus, they have been included in the Aquaexcel project 3.0, the third consecutive collaboration project between top-research facilities for the coming five years. WUR is awarded in excess of 600 thousand euros in funding by the EU.

Professor Geert Wiegertjes of the Aquaculture and Fisheries Group is delighted with the European collaborative project. ‘This demonstrates that WUR is a party to be reckoned with in the international field of aquaculture research,’ Wiegertjes states. ‘And, if we wish to feed the increasing world population with animal-based protein, we will have to eat more fish in the future.’