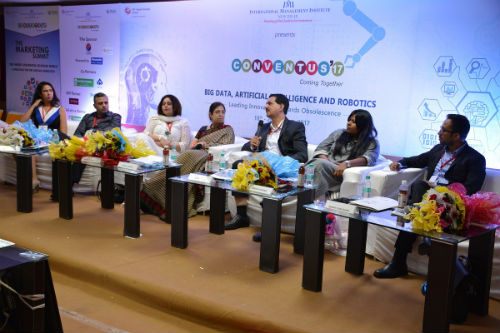 The theme for this year was ‘Big Data, Artificial Intelligence & Robotics Leading Innovation towards Obsolescence’. The three-day knowledge extravaganza boasted of eight sessions panning lectures and panel discussions by 48 eminent speakers that will help the future managers in learning new trends.

Inaugurating the session, Prof. Debashis Chatterjee, Director General, IMI had laid emphasis upon the change that has incurred in the human evolution throughout, citing historical examples like Babur and Britshers who used advanced technologies in their respective era. He further said that the technology change is not a linear process, changing throughout and advancing at a breakneck speed and set pace for the event that would be an edifying session for the students.

During the first session, Mr. Tabrez Ahmed, Director – Government Affairs at eBay spoke at length about the impact of technology on human deployment at work. He stated that the boost in the Information Technology Sector created millions of jobs, whereas Artificial Intelligence will be the biggest contributor to job-losses in times to come. Adding the human element to this factor, Mr. Dinesh Pillai, CEO, Mahindra Special Service Group said that AI will reduce job opportunities, but, in no way can the involvement of the human entity be ignored when dealing with AI.

The second day commenced with the Operations Summit gave the students the opportunity to imbibe useful insights on the theme of ‘Evolving Identity of Operations Industry 4.0’. With the advent of Industry 4.0 the business world has witnessed marvels in the manufacturing processes and digital integration in operations.

1. How deep is the crisis of automation and what are its implications?
2. What public sector policy needs to be undertaken in order to establish equilibrium among labour and capital?

The debate during the Economic Summit showcased a positive aspect to technological advancements that the automation of trivial activities would leave humans with more resources on their hands in the form of time, which could be utilized in learning newer, more relevant and forward looking skills. Talking of the exponential pace at which technology arrives, Mr. Rakesh clarified that, “It isn’t the job that is being transferred, it is the work that is being redefined”. The session further threw light on the relationship of policy on labour and skilling.

During the conclusion ceremony, Prof. Debashis Chatterjee, Director General, IMI thanked the eminent guests for sharing the pearls of wisdom and laid emphasis on imparting knowledge and equipping the future managers with the know-how of technological trends before commencing their professional journey.

The 6th edition of Conventus concluded with thought-provoking ideas provided by the 49 eminent speakers enabled the future managers to create an understanding regarding Big Data and Artificial Intelligence. Conventus 2017 truly witnessed the ‘coming together’ of ideas, discussions and perspectives with students, faculty and staff uniting to discuss the impact of digitization in today’s dynamic environment.