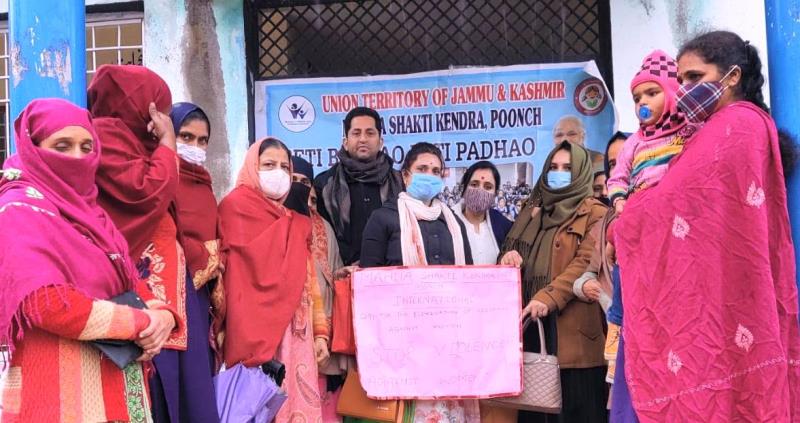 Poonch: Mahila Shakti Kendra (MSK) Poonch, under the supervision of District Development Commissioner, Rahul Yadav, today organised an awareness camp to mark the International Day for the Elimination of Violence against Women.

The awareness camp was held at Village Kuniya Poonch where MSK team generated awareness among the women folk about the legal protection against violence against women and children and various government schemes for their socio-economic empowerment.

The Women Welfare Officer said that violence against women is a widespread and devastating human rights violation that takes place across the globe. She informed about various schemes of Employment office, JKRESTI and Social Welfare for the welfare of women.

The District Coordinator said that there is need to do much more to respond to the cries for justice of women and children who have suffered violence. She highlighted various manifestations of violence against the women such as intimate partner violence, sexual violence, sexual harassment, Rape and Human Trafficking.

Imtiaz Salaria. Municipal Councilor highlighted the importance of education of girl child and asked the parents to love their girls like boys. He expressed the need for protection of the rights of the girl child.

District coordinator, Tirath Kour spoke about the benefits of BBBP scheme which ensure the survival, protection, education and participation of girl child through coordinated and convergent efforts. She also informed the women about toll free women helpline number 181which is available for 24 hours.

Later, sanitary pads were distributed among the participating women.