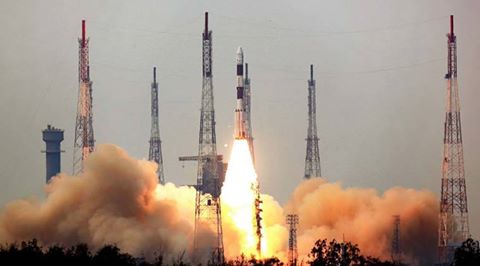 By India Education Diary Bureau Admin Last updated Apr 23, 2020
Share
New Delhi: In its thirty seventh flight (PSLV-C35), ISRO’s Polar Satellite Launch Vehicle successfully launched the 371 kg SCATSAT-1 Satellite along with seven co-passenger satellites today morning (September 26, 2016) from Satish Dhawan Space Centre SHAR, Sriharikota. This is the thirty sixth consecutively successful mission of PSLV. The total weight of all the eight satellites carried on-board PSLV-C35 was 675 kg. PSLV-C35 is the first PSLV mission to launch satellites carried onboard into two different orbits. This PSLV mission was the longest of the PSLV missions conducted till date and was completed in 2 hours 15 minutes and 33 seconds after lift-off.
After PSLV-C35 lift-off at 0912 hrs (9:12 am) IST from the First Launch Pad with the ignition of the first stage, the subsequent important flight events, namely, strap-on ignitions and separations, first stage separation, second stage ignition, payload fairing separation, second stage separation, third stage ignition and separation, fourth stage ignition and cut-off, took place as planned. After a flight of 16 minutes 56 seconds, the vehicle achieved a polar Sun Synchronous Orbit of 724 km inclined at an angle of 98.1 degree to the equator (very close to the intended orbit) and 37 seconds later the primary satellite SCATSAT-1 was separated from the PSLV fourth stage.
After separation, the two solar arrays of SCATSAT-1 satellite were deployed automatically and ISRO’s Telemetry, Tracking and Command Network (ISTRAC) at Bangalore took over the control of the satellite. In the coming days, the satellite will be brought to its final operational configuration following which it will begin to provide weather related services using its scatterometer payload. The data sent by SCATSAT-1 satellite will help provide weather forecasting services to user communities through the generation of wind vector products as well as cyclone detection and tracking.
After the successful separation of SCATSAT-1, the PSLV-C35 mission continued. Still carrying the seven co-passenger satellites, the fourth stage of PSLV coasted over the South polar region and then started ascending towards the Northern hemisphere. A safe distance between the orbiting SCATSAT-1 and PSLV-C35 fourth stage was maintained by suitably manoeuvring the stage.
At 1 hour 22 minutes and 38 seconds after lift-off as the fourth stage was in the North polar region, the two engines of PSLV fourth stage were reignited and fired for 20 seconds. As a result of this, it entered into an elliptical orbit measuring 725 km on one side of the Earth and 670 km on the other.
Related Posts

Apr 16, 2022
And 50 minutes later, as the PSLV fourth stage was again coasting near the south pole, its engines were fired for another 20 seconds. This second firing made the fourth stage to enter into a circular orbit of 669 km height inclined at an angle of 98.2 degree to the equator.
37 seconds later, the Dual Launch Adapter was successfully separated from the PSLV-C35 fourth stage. 30 seconds after this event, ALSAT-1 was the first co-passenger satellite to be separated successfully. Following this, the NLS-19, PRATHAM, PISAT, ALSAT-1B, ALSAT-2B, and Pathfinder-1 were separated from the PSLV fourth stage in a predetermined sequence thereby successfully completing PSLV-C35 mission.
Of the seven co-passenger satellites carried by PSLV-C35, two – PRATHAM weighing 10 kg and PISAT weighing 5.25 kg – are University/Academic institute satellites and were built with the involvement of students from IIT-Bombay and PES University, Bangalore and its consortium, respectively.
The remaining five co-passenger satellites were international customer satellites from Algeria (three – ALSAT-1B, ALSAT-2B and ALSAT-1N), Canada (one- NLS-19) and the United States (one – Pathfinder-1).
With today’s launch, the PSLV’s capability to launch satellites into two different orbits has been successfully demonstrated. The total number of satellites launched by India’s workhorse launch vehicle PSLV has now reached 121, of which 42 are Indian and the remaining 79 are from abroad.
Share FacebookTwitterGoogle+ReddItWhatsAppPinterestEmail