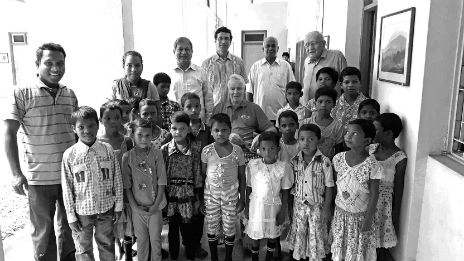 Jamshedpur : Fr Edward Hugh McGrath, SJ, one of the founding fathers of XLRI, left for his heavenly abode on 4th August, 2017. He spent his last days of life in Fr Guidera Residence, XLRI. Fr McGrath was director of XLRI from 1959 to 62, and 1981-82.

Fr McGrath was born on 7 January, 1923, to Dr John F McGrath and Lillian McGrath in New York. He came to India in 1949, a time when the country had just gained freedom and was painstakingly building the foundation for a democratic state. It was Fr McGrath’s resolute faith in the three vows that a Jesuit undertakes: poverty, chastity and obedience that led him to India. His entire life revolved around these three vows.

On arriving to Jamshedpur he was asked to teach fourth standard students in Loyola School along with taking public speaking classes for XLRI students and helping Fr. Enright run XLRI.

After spending a year in Jamshedpur Fr McGrath left to continue his Theology studies and prepare for his ordination. From 1951-53 he was at Kurseong and on 21st November, 1953, he was ordained as a priest.

In 1957 he was back at XLRI, Jamshedpur to work with Fr Quinn Enright. When Fr. Enright went back to the US, Fr McGrath took over as Director and along with a team of dynamic Fathers and lay colleagues managed to put XLRI on the map of the country’s finest business schools from where it has not budged in over six decades.

Fr McGrath at the young age of 36 became the second director of XLRI-a school of labor relations that was born out of a dream to strengthen industrial India, through the strengthening of her trade unions and her personnel managers whilst practicing ethical management.

He conducted several courses for management and trade union groups at XLRI. During the 60s, under his guidance XLRI started offering courses for unions in collaboration with the steel union at the Steel Worker College.

In 1987 Fr McGrath moved to the Human Life Centre in Bhubaneswar, Odisha, and took over as director there. He developed vocational training courses, viz., written and spoken English, computer operating, tailoring, and carpentry among others.

“My close interaction with Fr McGrath was from 1976-78, when I was a student at XLRI. He taught our batch three courses. His basic pedagogy was learn by doing. I have known Fr McGrath for the last 45 years and lived with him for several years. What I admired most about him was his love for students, love for poor, his hard work and his fantastic sense of humour. He was truly a great human being and a wonderful priest” commented Fr E Abraham, SJ, Director of XLRI

Ratan N Tata, Former Chairman, Tata Sons said, “Fr McGrath was amongst the first few people I met when I was assigned to Jamshedpur. I can never forget his ability to put you at ease and the warmth of friendship. I feel privileged to have known Fr McGrath and to have had the pleasure of interacting with him in Jamshedpur over the years.”

“I am privileged to have known him for nearly 50 years — beginning with the day I joined XLRI as a student in 1968. Though he never taught me formally in class, he was a Guru to me in a much broader sense ever since then. He was a true friend, an enthusiastic faculty colleague, and briefly my boss as Director” commented Dr. Jittu Singh, former faculty.

Fr McGrath’s funeral service will be on 7th August at 10 am at the St Joseph’s Cathedral, Golmuri, and the burial ceremony will be immediately thereafter at Jesu Bhavan, Mango.