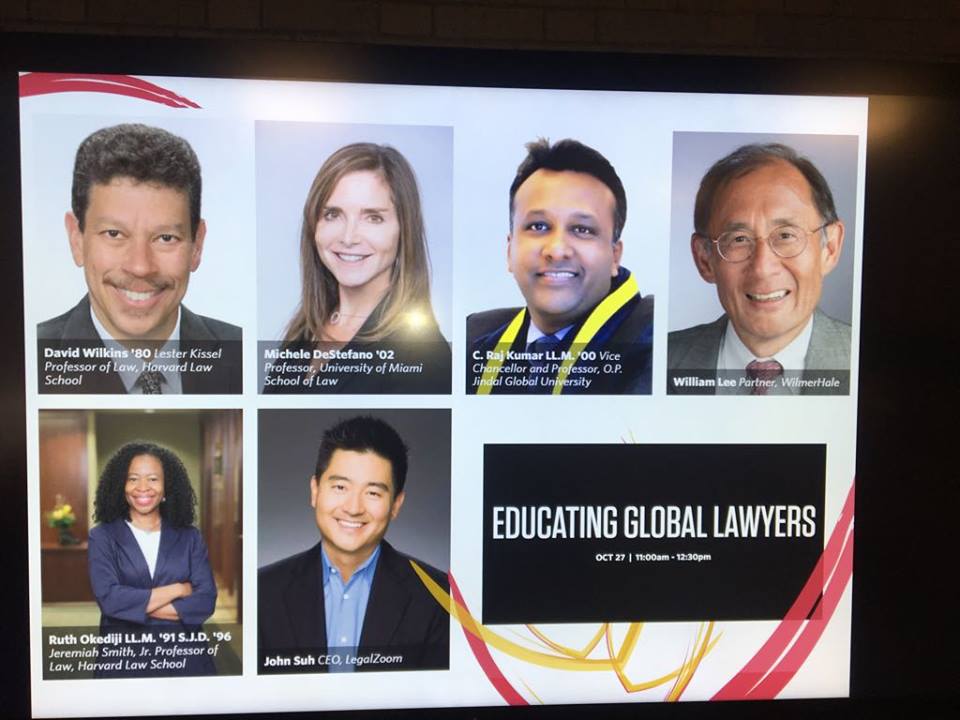 It is notable that JGU was the only Indian university and Jindal Global Law School (JGLS) the only Indian law school at the event which witnessed participation of over 250 speakers from around the world.

Professor Kumar shared his insights and perspectives in a session themed “Educating Global Lawyers” which discussed the challenges of adapting legal education curricula to the rapidly changing needs of employers, workplaces and society as they moved further into the 21st century.

Speaking at the session on “Educating Global Lawyers” at the Bicentennial celebrations of Harvard Law School to mark 200 years of its existence, Professor (Dr.) C. Raj Kumar, Founding Vice Chancellor of JGU and Founding Dean of JGLS observed, “Legal education in India has transformed from its early origins as a professional practice of law in courts to an autonomous discipline of law that fulfils a broader set of social, economic and educational goals and aspirations. The evolution of legal education in India has raised the standards of the legal profession and has further accentuated the impact of economic globalisation in a range of legal services. This trend will continue as the new generation of law schools in India such as the National Law Schools and a few select not-for-profit private law schools such as the Jindal Global Law School are raising academic standards, providing research opportunities to faculty and students and contributing to the knowledge creation and publications, while training the next generation of global lawyers. Legal education and legal profession in India need to drive the agenda for social, economic, and institutional reforms. The globalisation of legal profession has impacted the nature and context of legal practice in India but a vast number of law schools and lawyers are not prepared to effectively address this change.”

Taking the Jindal Global Law School as a Case study, Professor Kumar articulated the vision for global legal education and how developing countries in Asia and Africa need to play a leadership role in the establishment of standards and participation in providing high quality legal services. He said, “But unlike the law schools in the developed world, legal education in Asia and Africa will have a strong dimension of social engineering and seeking the role of law as an instrument of social change. It will need to address issues of systemic and institutionalised forms of injustices perpetrated due to corruption, discrimination and authoritarianism. Legal education and the legal profession is called upon to make democracies function effectively on the basis of the rule of law and good governance so that the constitutional goals do not remain as unachievable rhetoric but become a reality through ensuring greater degree of transparency and accountability. This is a particularly significant role that law ought to play in countries in Asia and Africa such as India.

Discussions at the ‘HLS in the World’ event featured sessions on critical debates in law and other disciplines, including Criminal Justice Reform and Advocacy through Storytelling, Critical Legal Movements and Harvard Law School, International Human Rights Law, International Criminal Law from Nuremberg to the ICC and Beyond, Tech, Law, and Law Teaching, The Future of Private Equity, LGBT Law, and Artificial Intelligence and the Practice of Law.

Professor Kumar also spoke about the five pillars of global legal education that are imparted at JGLS and have defined its vision and mission for chartering a new wave of reforms for the future of the legal education and the legal profession:

1. Recruiting outstanding faculty members from India and around the world (over 20% of faculty are non-Indian nationals recruited from around the world) who are engaged in innovative teaching pedagogy and research driven by a mission to contribute to excellence while promoting all forms of diversity in faculty hiring (over 45% of faculty are women);

2. Developing an Interdisciplinary curriculum that helps the students to pursue a range of learning opportunities to critically and analytically engage with law and legal institutions through rigorous classroom teaching, effective clinical programmes, experiential learning and research and writing work undertaken by the students and the faculty at the fifty-plus research centres located within JGU;

3. Providing a balanced learning opportunity that will help the students to become thinking individuals in the field of law and beyond and to be able to contribute to the social development and economic growth of countries and societies based on the principles of the rule of law and access to justice;

4. Creating international programmes for law students with a view to contributing towards educational advancement, professional training and capacity building for the next general of global lawyers for whom geography may become history, but for whom, law reforms will always be driven by social context.

5. Empowering law students to pursue a diversified set of legal careers and careers beyond the law that will enable them to apply their knowledge, skills, perspectives and values to shape the future of the legal profession, judiciary, businesses, governments and societies in India and around the world.

University of Bristol: Science Creates opens second incubator for next generation of…

iednewsdesk Nov 29, 2021
The incubator, which is operated in partnership with the University of Bristol and Research England and located…