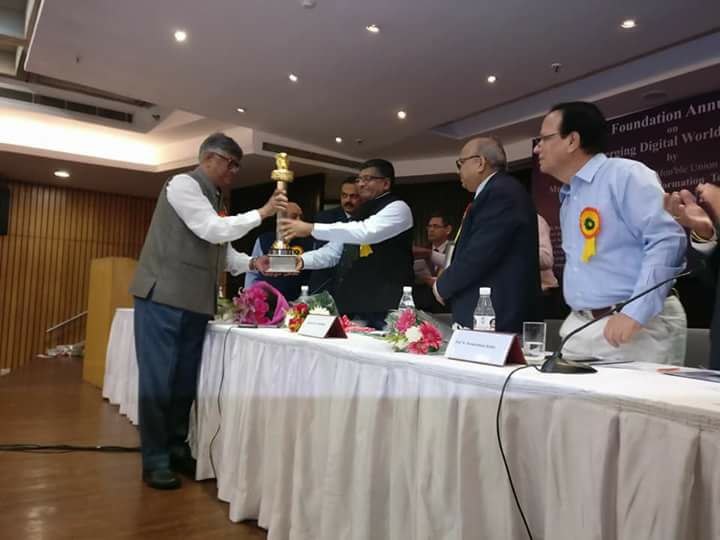 New Delhi: Vice Chancellor, Jamia Millia Islamia (JMI), Prof Talat Ahmad has been conferred with the prestigious ‘Capital Foundation National Award’ in recognition of his contribution to
‘University Administration and Academic Excellence’. The award, instituted by the Capital Foundation Society, a non- governmental, non profit organization, was presented to him by Union Minister for Law & Justice, Electronics and IT, Shri Ravi Shankar Prasad at an impressive function in Delhi yesterday.
Expressing his happiness on receiving the honour, Prof Ahmad said that they have recognized his contributions especially his approach in linking and mainstreaming University of Kashmir with other institutions of the country. Before coming to JMI, Prof Talat Ahmad had served as Vice Chancellor of the University of Kashmir .
Prof Ahmad said that his energy and efforts in encouraging high quality research and
teaching not only in JMI but also in University of Kashmir and as Professor in University of
Delhi have been recognized. The Delhi-based Society, established in 1987 and whose founder patron was Justice V. R. Krishna Iyer, has been engaged in bringing together people of thought and learning to deliberate and articulate public opinion on issues of national and international importance and matters of public policy.
Previous recipients of the Society’s awards include—Former Prime Minister Shri I K Gujral,
Former Attorney General of India Shri Soli Sorabjee, Former Chief Justice of Delhi High
Court Justice Rajinder Sachar, Former Union Ministers, Shri Kapil Sibal and Salman
Khurshid and Former Vice-Chancellor, University of Delhi Prof. Deepak Pental.