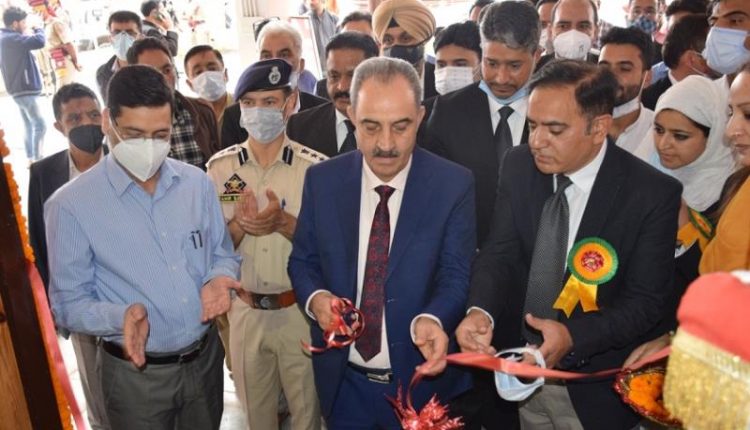 During visit to different districts, Justice Magray inspected Lok Adalat benches and distributed various awards of compensation to victims of MACT and other disputes.

Delivering inaugural address on the occasion, Justice Magray emphasized that Lok Adalat (People’s Court) is one of the alternative dispute resolution mechanism, where the cases or disputes which are pending in a court or which are at pre-litigation stage are settled in an amicable manner.

He said Lok Adalats serve very crucial functions in India due to many factors like pending cases, illiteracy, poverty, high vacancy in courts etc. He reiterated that resolving disputes through Lok Adalat not only minimizes litigation expenditure, but also it saves valuable time of the parties and their witnesses.

In the District , a total number of 10,000 matters were taken up and 9000 number of matters were settled amicably by engaging all the concerned Officers of District Budgam. The total settlement amount realized in the District was Rs. 7.23 Crores. Out of the total amount, Rs 1 crore has been settled in the pre litigation matters. Fozia Paul Secretary DLSA Budgam co- ordinated the National Lok Adalat in District Budgam.

He also interacted with the judicial officers and discussed issues faced by them in the smooth dispensation of the justice and added that no inconvenience or problem should be faced by the Bar members and Litigants within the Court premises and as such infrastructure needs to be Bar and Litigant friendly.

The Justice also inspected the Court Rooms, E-Court Room, Judicial Staff Rooms, and facilities available for Litigants, Lawyers and overall infrastructure of the Court Complex for the smooth functioning of the Courts.

Justice Magrey also visited Anantnag where he took stock of the proceedings and of various cases, discussed and settled in the said Lok Adalat.

On the occasion, while talking to media, Justice Magray said that around 50000 cases have been amicably settled today in various courts of J&K, He said that such cases were identified during last 2 months and settled amicably today.

He lauded the services of Para Legal Volunteers for persuading the petitioners to approach their respective courts for amicable settlement of their pending Court cases. He also congratulated such petitioners whose cases were settled amicably in today’ s Lok Adalats.