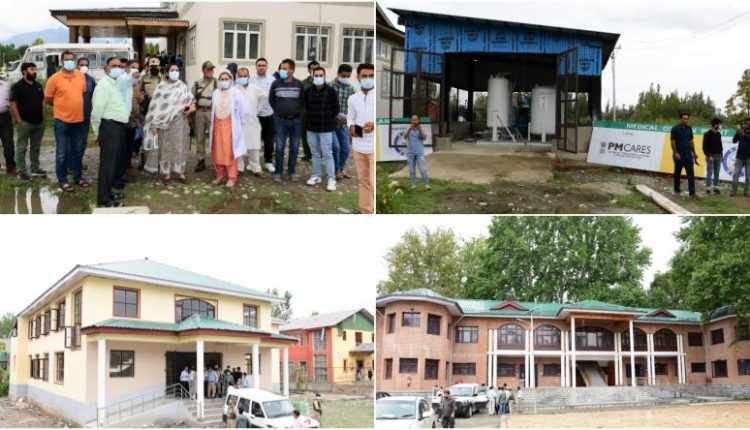 GANDERBAL: Deputy Commissioner Ganderbal, Krittika Jyotsna today conducted an extensive tour in order to have a firsthand appraisal about the progress on various ongoing development projects.

During visit, the DC inspected the progress made on under construction NTPHC Shalabugh, DakBanglowFathepur, Medical Oxygen Plant at District hospital, PMGSY road at Bonibagh Kanganand many other ongoing works in the district.

While inspecting the construction of NTPHC Shalabugh, SE R&B briefed the DC about the physical and financial progress on the project and informed that all major works are completed except few minor finishing works including fencing and filling of ground.

The DC directed the SE, R&B that the remaining works should be completed within a week so that the project is inaugurated on time and thrown open for the public.

While inspecting the progress on DakBanglowFathepur, which is also executed by the R&B department, the SE informed that the total project cost is Rs 490 lakh which include Rs249.53 lakh of Languishing component and 95 percent physical work is completed till date.

Keeping in view the importance of this prestigious project, the DC directed him to expedite the work progress so that it gets completed within a given timeline.

Earlier, the DC inspected the progress on Medical Oxygen Plant which is being installed at District Hospital Ganderbal.

Hospital authorities informed the DC that the Oxygen concentrator plant is being established under PM Care Fund with 1000LPM capacity.

Meanwhile, the DC inspected the progress of road from Bonibagh to Bonibagh Bala in Kangan which is executed by PMGSY. Executive Engineer PMGSY informed the DC that sanctioned cost of the said road is Rs 136.67 lakh and expenditure till date is Rs 126.71 lakh.

The DC gave necessary instructions to the Executive Engineer for speeding up the progress of work so that the road get completed within set timeline.