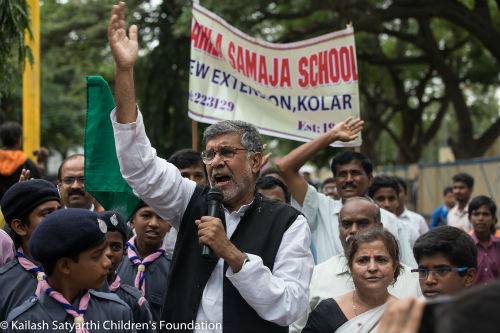 Kolar: The Bharat Yatra, launched by Nobel Peace Laureate Kailash Satyarthi on 11 September, entered the state of Karnataka, reaching Kolar on 15th September, the fifth day of the 35-day long march across the country to build unprecedented awareness on combating child sexual abuse and trafficking.

The district commissioner of Kolar, Dr. Trilok Chandra received the Nobel Peace Laureate and his co-marchers at Kolar, as the march entered the city.
The march, led by Mr. Satyarthi was joined by Dr. Chandra and BB Cauvery, (CEO, Zila Panchayat, Kolar) and both have wholeheartedly declared support for the Bharat Yatra and the cause it espouses.
Within five days of the launch, this march has already mobilized and has been joined by over 55,000 children, youth and working professionals, with the largest turnout in Kolar of nearly 10,000 people, who demanded for a stop to child sexual abuse, called for better laws in the country and pledged to protect the children of India from these heinous acts. The Yatra marchers called upon the youth of the country to step up and fight for children across India. They urged people of Kolar to strive towards building a safe childhood and a safe India.

This spirited march was followed by a public address at Chennaiah Rangamandira, urging citizens of Kolar to join the march to foster a safe country for our future.

Said Mr. Satayarthi, “It is not enough to declare a war against rape and sexual abuse. We must look towards concrete solutions and confidence building measures to ensure the security for our children. I urge all of the political community in the country to go back to school as an ordinary parent. See things on your own, feel the environment, question them. Schools are supposed to be an institution of learning and a haven for our children. It should not be a place of torture.”
Let us solve problems creatively, let us come forward and pledge to work and advocate a safe childhood for our children. I appeal to all parents to help instil a sense of trust and be friends with your children, so that they can speak fearlessly about any problem. Surakshit Bachpan-Surakshit Bharat has to be realized for our children, politically, economically and socially,” he added

Tech Mahindra Recognized as a Leader in Gartner 2021 Magic…

Ever since its launch, Bharat Yatra has been drawing enormous support from citizens across India, including Amitabh Bachchan who tweeted to his fans to support the Yatra. Earlier, Union Minister for Shipping and Finance Mr Pon Radhakrishnan had flagged off the Yatra from Kanyakumari along with Mr Satyarthi. In Trivandrum, Kerala Chief Minister Pinarayi Vijayan assured whole hearted support from his government in eradicating the menace of child sexual abuse and trafficking.
Prime Minister Narendra Modi had sent a personal letter to Kailash Satyarthi extending his support to the Yatra, which will cover 11000 kilometres across 22 States, including Tamil Nadu. Some of the key cities it covers include Chennai, Bangalore, Hyderabad, Mumbai, Guwahati, Bhopal, Jaipur, Srinagar among others.

At Kanniyakumari during the flag off Mr Satyarthi had declared, “I will not rest till children of this country are not safe. I am not going to stop fighting if the raping and abuse do not stop. I cannot sleep in peace until we win our war against rape and abuse. This moral epidemic haunts our nation, and it is time we fight against it, together.”

Re-iterating his mission behind launching the Bharat Yatra, he said “Why am I marching? Because my children are being raped. I refuse to accept that eight children go missing and two are raped every hour. Each time if a single child is in danger, India is in danger. Bharat Yatra is to make India safe again for our children.”

StockMIND begins the ‘Quest for the best budding Investor’ 2018

India Education Diary Bureau Admin Mar 7, 2021
Prof. Martha C. Nussbaum, a philosopher whose prolific and influential contributions have made her one of the…